An Interview With HELLO OPERATOR

Hailing from the beautiful medieval city of York, Hello Operator (comprised of Max and Sam Dalton, Peter Greenwood and Eddy Ellison) have spent a great many years perfecting their art and sealing their place as one of the hottest up and coming bands in the country. Renowned for their explosive live shows and impeccably crafted, colossal rock aura, the band initially came together in 2014... and 2018 looks set to be their biggest year yet. 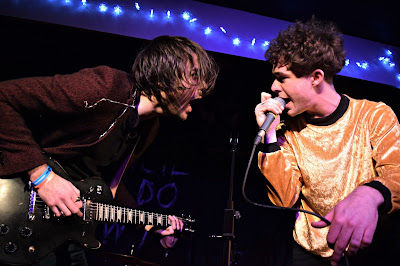 Following on from the likes of the fervid 'Stephanie' and the raw swagger of 'Oosh', latest single 'Animalize' is a highly charged, gripping and ferocious display of absolute musical power; it's the first teaser of their forthcoming debut album due out later this year, and a surefire sign that they mean serious business. In a sea of bands striving for notoriety in their field, Hello Operator are the crème de la crème of the rock and roll genre, continually creating a buzz wherever they go and receiving vivacious acclaim from the likes of This Feeling, BBC Radio 1 and more.

In the build up to the unveiling of their long awaited album, I spoke to the enigmatic quartet about all things past, present and future...

How and when did you first come together as a band?
Eddy: I was probably in year 10 at school, and there was like 9 of us... it was ridiculous!
Peter: Yeah, we had a big band to start with. At our school, they'd do an annual big gig which everyone would form a band to play in. I think there was about 3 singers, originally!
Eddy: Only the best members survived, basically.
Peter: When it actually came to the day of the gig, I think there was like 4 of us left... and here we are now!

What are your earliest memories of music? What sort of stuff did you grow up listening to?
Eddy: I was into Led Zeppelin, AC/DC... best band ever! That's probably all I used to listen to.
Peter: When I was really young, my dad used to listen to quite a lot of heavy metal so I was brought up on Metallica, System Of A Down, a band called Coheed and Cambria, Rage Against The Machine, Queens of the Stone Age... that sort of music. It sort of shines through in some of our songs, I think. The Rage side of it anyway... we haven't quite gotten around to the Metallica side of things just yet, but it'll come! When I first listened to heavy metal, I remember thinking 'What the absolute fuck is this? This is garbage,' but I absolutely love it now. Like Marilyn Manson... I absolutely love him.
Eddy: I really like Marilyn Manson. Nice guy, as well... but he's done some pretty weird stuff!
Peter: He has, but he's very theatrical, and you need that to stand out. Think of how much of a performance Queen used to put on... it's the same art, just perceived in a different way. It is what it is, really. You either love it or you hate it... and if you take it like that, it's the same with every other band.

Being from York, what do you have to say about the music scene here at the minute?
Peter: For a long time, we've had our doubts about York. With York in general, when we first started gigging, it was such a dead town.. we had maybe 2 or 3 music venues and only 1 of them was any good. Fibbers was obviously the good venue. I think The Crescent has really made things a lot more interesting now because it's something new and people are actually going to the shows there where as with everywhere else, even when you sell tickets to people and they've paid for them 9 times out of 10 they won't turn up.
Eddy: There's good bands in York... I'm a big fan of Naked Six. It's just a hard city.
Peter: It is. Especially when you consider with anywhere else, look at Leeds, Manchester, London... the big cities, there are a lot of opportunities there and a lot of people go to gigs there because they enjoy doing it. Here, the music scene just isn't as prominent. People in York don't go out to go to a gig, where as they will elsewhere. The venues are good... Fibbers obviously, and there was a place called The Duchess but that shut down, another place called Stereo shut down. Obviously they don't get the big acts, they kind of rely on the bands in and around York who they hope will bring plenty of people in so if people aren't going to the gigs and they aren't getting enough people through the door, that's how venues end up shutting down. It's a real shame because it's such a nice city. It is getting better... it's definitely improved within the last year or 2. As I said, The Crescent opening has helped because we've been able to pull in some alright bands.
Eddy:  They've been putting gigs on for about 2 years now. They had Texas play here. A little Scottish outfit called Texas. 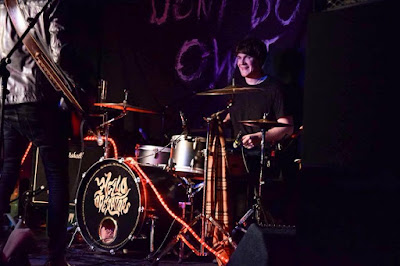 If you were to sum up the last 12 months in one definitive emotion, what would it be and why?
Eddy: Difficult!
Peter: In terms of us as people... ecstatic, maybe? We've had a really good year. It has been quite a sad year for music in general in terms of people who have died and venues that have closed down though.
Eddy: It's probably been our quietest year in terms of gigs. We've just been writing and recording loads. We've written some of the best songs we've ever written.
Peter: We've got an album coming out so we're building towards that. 2018 is going to be a big year for us. There's been a lot of exciting things going on behind closed doors! It might not look like we've been busy... but we have. As you can see, there's only 2 of us in the band now.
Eddy: I wish! Joking...

You've been doing this for quite a while now; I think you guys were one of the first bands I really got into when I first started to discover the underground music scene. Is there anything you've done so far in your musical careers that you're either especially proud of or feel has been pivotal in getting you to the point you're at now?
Eddy: We did RAK Studios last year and it was sick! That studio is incredible... some of the albums that have been made there is just insane.
Peter: Getting on with This Feeling was pivotal for us and really, really helped us in that we got to play at quite a lot of festivals and a lot of gigs up and down the country in places that we hadn't done before. It opened a lot of doors for us.
Eddy: We went to the Isle of Wight... I didn't even know there was an Isle of Wight! That was good.
Peter: Stuff like that, and generally just experiencing how much of a big family This Feeling really is. They look after you so well. This Feeling is the future of up and coming music, without a doubt. There's never been such a platform for up and coming bands. If you think of where the big bands are and where up and coming bands are, back in the day there was never this middle point which with This Feeling there is... it's a real stepping stone, which is good. Everyone supports each other, and everyone is at one anothers' gigs which is crucial.

How did you first become involved with them?
Peter: We were doing a Sofa Sounds session in York, and when we put that out, I think Mikey Jonns messaged us. He absolutely loved it and it just built from there. We were very lucky that he took us on, put us on at so many festivals and looked after us. We'd like to think we're very much part of the family now, and we're hoping to do more stuff with them soon. 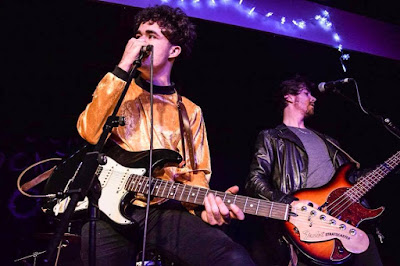 Has anyone in the band got any interesting talents or hobbies outside of music?
Peter: I play Xbox quite a lot... I'm quite an avid gamer! I spend so much time doing that. Eddy likes walking the dog.
Eddy: I don't even like doing that! Belly rubs... I'm good at that!
Peter: Cooking, occasionally.
Eddy: Can't do that.

There's always 1 person in the band who gets bullied the most...
Peter: It's not so much that we bully him... when we were on tour last year, to make things interesting we said that at any point, someone could just randomly punch you. We all just seemed to get Eddy and he's such a pacifist... he doesn't like hitting anybody or anything like that.
Eddy: What's the point? I've got morals. Actually I do have a hobby... meditating! Just thought of one. I don't punch people, I meditate. 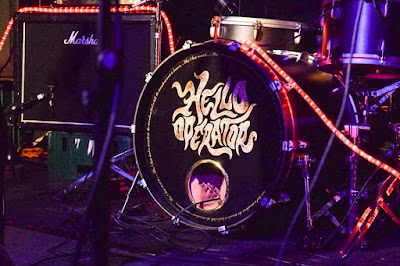 Tell me something about Hello Operator that no one else knows...
Eddy: We're brothers...
Peter: That's terrible. Max and Sam are actually brothers, but we're not. Everyone probably already knows that.
Eddy: I'm the youngest.
Peter: We used to have a different bassist... but maybe you already knew that? When we got in with our first ever management, we had another bassist. He was really good at bass, and a great guitarist too, but he was very fond of walking around with a Mr Men carrier bag so the image was just really off with him. 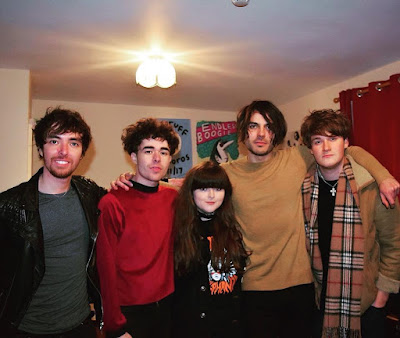 
Check out the music video for Hello Operator's brand new single 'Animalize' below:

Posted by Fiction Is Not Imagination at 09:48 8 comments: