With two mesmerizing albums under their belt RAZZ, despite their youth, are already somewhat old hands in the music industry. Their altogether unique and transfixing sound emits passion and intensity; some songs having an infectious air of synth-pop, complete with catchy hooks and choruses whilst on the other end of the scale, they have the ability to shock you with tracks that exude an almost haunting darkness. Coupled with a colossal stage presence, RAZZ truly are one of, if not THE most exciting musical discovery of my 2017 thus far. Throughout the course of October, the German rock quartet (made up of Niklas Keiser, Steffen Pott, Christian Knippen and Lukas Bruns) embarked on their very first UK tour alongside Yorkshires' Glass Caves.

I was able to chat with frontman Niklas following the Leeds stretch of their tour at the much loved Brudenell Social Club. It was my second time seeing them live, having initially discovered them when they played in the beautiful city of York just a few days earlier. Honestly, one of the most rewarding things about what I do is discovering new bands to fall in love with and within seconds of their performance having begun, I knew I'd found something special. 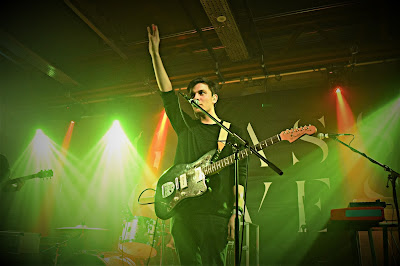 As we were about to begin, Niklas told me in a somewhat endearingly excitable manner that this was the first time he'd ever conducted an interview in English before. He then spent a good minute or two trying to pronounce 'Pontefract', the West Yorkshire town where both Glass Caves and I are from. Getting to travel the world and take your music to completely new audiences far and wide must surely be one of the scariest, albeit most exciting, parts of being in a band but RAZZ seemed to take to UK life like ducks' to water.

How and when did you first come together as a band?
Three of us all went to the same kindergarten and then we met Lukas at high school, where we all thought we'd like to start a band. We've now been together for five years or something like that.

What are your earliest memories of music? What did you grow up listening to?
I've grown up listening to all of my fathers' vinyls. He was into U2 and Depeche Mode... all that kind of stuff, which I really liked listening to. To be honest, we've got something in Germany called Ballermann Hits... these are the songs that are played in Mallorca. Those songs were really crappy but when I first listened to them I was like 'Yeah, this is good!' Then I found Depeche Mode, and I definitely prefer that!

Has this been your first time in the UK?
This is our first time ever! We've never been to the UK before and it's pretty amazing. The people in the crowd... some of them will stand there which is fine but there are also people, especially young people, starting what I think you call mosh pits? I really like that! That's pretty cool. I really like the UK. 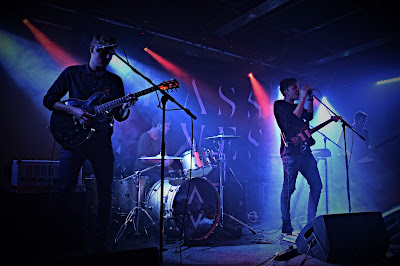 So you've had a pretty good reception at this string of gigs, then? Has anywhere in particular been a highlight?
I think so. So we were talking with the Glass Caves and they were saying that the best crowd was in Leeds today. There were so many people and it was a really lovely crowd. They were pretty good to us so this crowd were amazing. There were a lot of cities' that I really liked. York was pretty amazing and Edinburgh was really nice.

Have you had enough time to be able to go off and be tourists in all of these new places?
Just in Edinburgh, to be honest. We've just spent a lot of time driving around and seeing stuff from inside of the van but in Edinburgh we had a night out with the Glass Caves and they were showing us the castle which was really, really cool. So we've been small tourists!

What's the music scene like where you're from?
I think, not only the music scene but in general, the people are the same... really, really nice and there are so many of them that like to go to concerts. A lot of younger people really like concerts which I like so it's quite similar, I guess. We are from a really small village, with only about 1,500 people living there. The next town is about 50 minutes drive. To be honest, a lot of the people living there are not really into going to concerts so it's not as popular as it seems to be here. 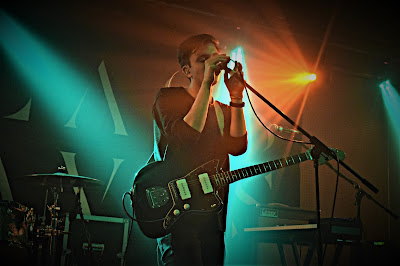 Music aside, has anyone in the band got any strange talents or interesting hobbies?
We're really good at playing FIFA! Steffen was pretty good at playing Ego-Shooters. We've got a playstation 4 in our van. We spend a lot of time playing on it... so you get pretty good! When we drove from Edinburgh to Bristol, it was like four or five hours so Steffen was really playing it non-stop so he must be really good...

What would you say is the most rewarding thing about what you do; is it the writing and recording process and getting to see a great track come together, or getting to go out on the road and actually perform the songs live to an audience?
Everything is quite good! I really like recording because you can really get into sounds and really try to make it the best thing you've ever done... but I do also like being on tour and being able to present the finished work to the people who are there to see you. That's really, really amazing... to see people coming to your show because they want to see you. But I do really like recording because that is what musicians do... finding things and finding nice sounds. If I had to choose one, I'd probably go with touring.

Are you the primary songwriter or is it more of a collaborative effort?
Kind of. I write the melody and the lyrics then I go into our rehearsal room and the others' will bring in ideas or drum beats. It's kind of like building a house, building up and up all of the time. 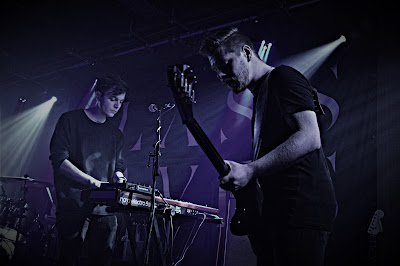 If you could travel back in time, where would you go and what would you do?
To be honest, I'm pretty happy to be alive in this time! I mean, we're living in a good century... but if I had to travel back in time I'd probably go to the 80's because I like that kind of music. I like the 80's! Or maybe the 70's... or maybe the 60's? I don't know! There are just so many good bands... I mean, The Beatles started out in the 60's!

Is there anything in your career so far, whether that's a particular song you've made, a certain show you've played or perhaps something else entirely, that you're either especially proud of or feel has been integral in getting you where you are today?
A few things. It was a huge honour to play Rock am Ring, which is the biggest festival in Germany. There's Rock am Ring and Rock im Park, and we played there which was really good. It's a bit like your Reading and Leeds. But it's also been an honour to record with Stephen Street. That was a lot of fun. Stephen Street worked with The Smiths, Blur, Morrissey... and he was producing our second album. He worked with so many great bands, so for us that was amazing.

Finally... what are the hopes, dreams and plans for the future?
Actually, we have achieved one of our dreams already and that was to play in the UK. We hope to come back again, so that is one of our aims. 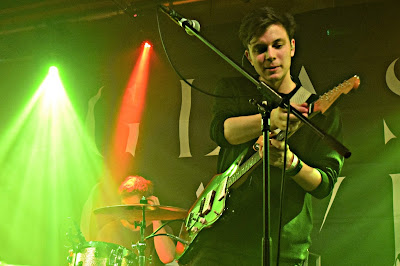 Listen to RAZZ via Spotify below: 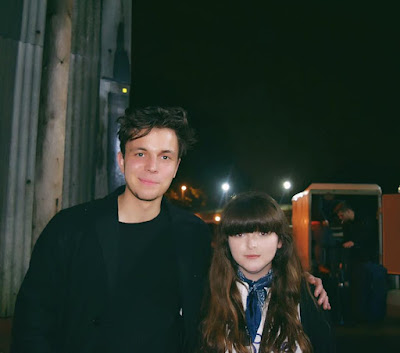 Posted by Fiction Is Not Imagination at 11:44