I was particularly excited for day two of Tramlines 2017 for the simple reason that my two favourite bands Cabezudos and October Drift were both scheduled to play at my favourite of the festivals' fringe stages, the Crystal Bar. I think the whole world is aware by this point that I have a bit of a soft spot for Cabezudos, though I'll hold my hands up and confess that I missed the majority of their performance due to being (fashionably) late arriving. What I did see was Crystal Bar packed to the rafters, despite their early stage time, and everyone completely in awe of the band and their effortless and euphoniously emotive live show. This is a band well suited to the festival environment and who are clearly at ease on a sizeable stage. 2017 is already proving to be the year of Cabezudos and as their fanbase continues to grow, things only look set to get bigger for this Liverpudlian quintet.


Following a catch up with Cabezudos, it was time to head off to my second venue of the day to see Grimsbys' finest exports, Mint. I spent a lot of time at Tiger Works Bar during last years' festival, and it's a great little venue... admittedly, one of the main reasons I like it so much is the air-con and the fact they sell my favourite brand of cider, but the stage set-up and sound are always second to none. Mint are the perfect festival band for a number of reasons; first and foremost, their impressive ability to craft the ultimate feelgood indie-pop anthem, and secondly, the simple fact that they can always be relied upon for a thoroughly entertaining, fun and energetic live show. This band have such a flair when it comes to bold and dynamic instrumentation, and there's such an endearing chemistry between them which makes what they do all the more authentic. Every time I see them they seem to have upped their game, and this was most definitely the strongest performance I've seen from them to date.


When it comes to putting on a totally raw and atmospheric performance, I think it would be incredibly difficult to beat the sheer might of Avalanche Party. Complete with fervid instrumentation and searing vocals from the word go, they had their audience in the palm of their hand and this was nothing short of a spectacle. Frontman Jordan Bell hangs over the stage and eyes his audience almost menacingly; it's impossible to look away, and he is undeniably mesmerizing. 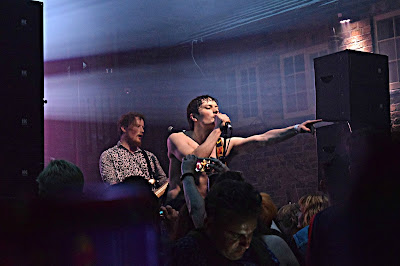 October Drift are undoubtedly one of the most hardworking, dedicated young bands in the country and it's wonderful to see them doing so well at the moment. Fresh from a coveted performance at Glastonbury earlier this year, and returning to the Tramlines Crystal Stage for the third year in a row, the band drew in a gargantuan crowd... and rightfully so; the raw and unforged energy within their sound radiated throughout the room as they powered through their hard-hitting set with force and jubilance, frontman Kiran Roy leaping from the stage at one point and performing from the rooftop.


SHEAFS seem to have had everyone falling under their spell of late, and have become a much loved and familiar fixture on this years' festival circuit. They have such a phenomenal stage presence, supplying killer vocals and stunningly vehement melodics by the bucketload. They truly are one of the most impressive and powerful live bands on the block, and I always notice whenever I see them that there's always a real sense of excitement and awe throughout the crowd within seconds of them having taken to the stage. To be able to command an audiences' attention so wholly as SHEAFS do is an impressive feat indeed, and this performance was living proof that they are 100% worthy of the hype surrounding them at the moment.


It's been a while since I last saw The Wholls, so despite the pouring rain (and with a drunken Jack from Cabezudos in tow, by this point belting out his rendition of "Yes Sir, I Can Boogie" for the people of Sheffields' listening pleasure) I made my way over to the Frog & Parrot. Zealous guitars coalesced with staggering vocals and an all around audacious instrumental vim made for an exceedingly trenchant and rhythmically pulsing performance. The Wholls never fail to delight.


It's impossible not to fall in love with the vibrancy and vitality of Paves, and I couldn't think of a more perfect way of ending Saturdays' proceedings than seeing them perform again for the first time in almost a year. This was their second set of the day, having already performed over at The Rocking Chair for This Feeling earlier in the afternoon. This was to be their 'secret set', though word must have gotten out because the Frog & Parrot was fit to burst. The band took to the stage at midnight, immediately filling the room with their transcendant and ludically hypnotic musical aura. Frontman Lukes' confident vocal verve is perfectly accentuated by thrilling riffage and an all around soulful, atmosphere soaked edge. 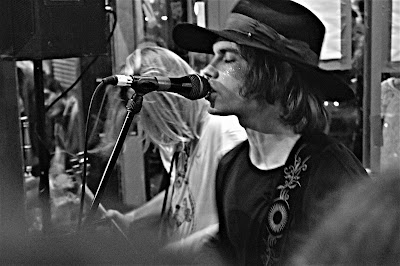 Special mention must go to the brilliant Aaron Procter of AMP Live, who has done such a wonderful job and curated an absolutely brilliant line up at the Frog & Parrot this year. Ending day two of the festival watching him be passed through the crowd like a king was quite the experience!

Part Three coming soon...
Posted by Fiction Is Not Imagination at 10:54