The Slow Readers Club are easily one of the most respected bands on the circuit at the moment, and with two sterling album releases to their name as well as a string of huge live performances alongside the likes of James, The Charlatans and Elbow under their belt, it's not difficult to see why. Throughout their careers, the Manchester based quartet (made up of Aaron and Kurtis Starkie, James Ryan and David Whitworth) have received high acclaim and airplay from BBC 6 Music and XFM, and have become known and loved for their ineffable live performances, boasting sold out headline shows at some of the UK's most prominent music venues.

With the band in the studio working on album three and yet another gargantuan headline tour planned for the end of this year, there is a great deal of excitement circulating around this band at the moment. I was able to catch up with them back in late May when they made a whirlwind visit to Leeds to headline a sold out Belgrave Music Hall. 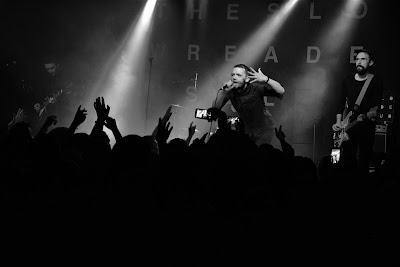 How and when did you first come together as a band?
Aaron: Me and Jim used to be in a band called Omerta. For one reason or another, the drummer and then the guitarist left. Kurt was at a point where he was looking around and we'd always wanted to be in a band together. For a while when we first started it was just me, Kurt and Jim. David came in, jammed with us a bit and it worked out well.

What did you grow up listening to, and would you say that any of that influenced you to want to make music yourselves?
Aaron: Our dad was a big fan of Elvis, motown and loads of 80's pop. He was a DJ in Manchester, so there was always music around in our house. It's similar to the music that we listen to now in the bus. We have a Spotify playlist of tour bus tunes and it's pretty much 80's pop stuff. We're 80's kids so we were watching stuff in the cinema like Back To The Future, The Goonies and that kind of thing! The music that we listened to was Yazoo, New Order, Madonna, Michael Jackson... the Rocky soundtrack! Cheesy pop, really! Later on, me and Kurt got into really cheesy stuff like Meatlof and Bon Jovi. Once we realized that it made us ostracized socially, we got into Nirvana and had a brief grunge period... and then Britpop happened. I feel like I'm telling you my life story! But yeah, all of those contribute to our sound, I'm sure. But maybe not so much Meatloaf. David has a mouthful of chips at the moment but he's a Led Zeppelin kind of guy.
David: A lot of it comes from my family. Led Zeppelin, The Beatles, Hendrix... that kind of stuff. 60's and 70's music.

With festival season coming up and you frequenting a fair few of our major festivals this year alongside acts such as Arcade Fire and Elbow... how does that feel?
James: Really good! If you go back to just over a year ago, we'd be happy to play to 30 people outside of Manchester. To have sold out Leeds, play on the main stage at Isle of Wight with the likes of Arcade Fire... it's just ridiculous. I know we keep harping on about it but we don't have any kind of label behind us, it's just us. So for us to be doing that in the same situation as we were 18 months ago is mad. Obviously we're really, really pleased about it. We couldn't ask for more.
Aaron: We went to see Arcade Fire in Manchester for the Neon Bible tour, so they're heroes of ours. We rehearsed in Blueprint where Elbow practise. From a lyrical perspective, Guy Garvey is fantastic.

Music aside, has anyone in the band got any interesting hobbies or strange talents?
James: I like making stuff out of wood. It sounds pretty pathetic, but I really like doing that! It's quite therapeutic.
Aaron: He'll come and say 'Lads, I'm doing a shed,' and then in three days, he'll have built a shed!
Kurtis: Not just your average wooden garden shed, either!
James: It's bigger than your house...
Aaron: Actually if you look at his beard, he has got a woodsmans' beard! Kurt used to be able to dance like Michael Jackson.
James: Aaron can do a pretty good disappearing act whenever we're getting stuff out of the van! He's literally there one second, and then he's gone. We could be in the middle of a field so he's got nothing to hide behind so I reckon that really is his biggest talent.
Aaron: I don't technically have anything to carry! 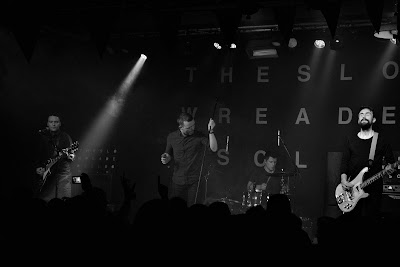 Is there anything that you've done so far, whether that's a particular song, a certain gig or perhaps something else entirely, that you're either especially proud of or feel has been pivotal in getting you to this point?
David: The Ritz gig was pretty special.
James: Growing up in Manchester, The Ritz is famous for loads of different reasons. Everyone knows what it is, where it is and how big it is so to have not only done a gig there but sold it out feels mad. We didn't really realize just how busy it was until we walked out. It feels mad that so many people would come out just to see us. We really appreciate it.
Aaron: Having played Night & Day, The Roadhouse, Soup Kitchen and pretty much every small venue in Manchester, to then go and do Gorilla, the Academy and the Ritz is just incredible. We're very appreciative.
James: I remember we said after we'd played Gorilla that no one could take that away from us, all that we'd achieved, and then literally a year later we'd do it to three times as many people in the Ritz. Gorilla is a great venue but the Ritz has so much history to it.

In terms of your creative process, is there a primary songwriter or is it more of a collaborative effort?
James: It's easier when you collaborate. A riff could come from anywhere, whether it's guitar or something on the keys, bass or a drum beat. If we like it, everyone will carry on playing it, and if it's crap then we'll all start dropping out one by one and you know that we're not going anywhere with that and it's time to move on. We'll jam it out as a band and then Aaron will ad-lib any old nonsence vocals over it to get a melody and then it goes from there.
Aaron: We get the most out of it when we write together as a four-piece. The challenge that we've had recently, because we've had more demand for doing shows and more demand for dealing with industry people and stuff like that, it's hard to get time in as a four-piece... but it's also a good problem to have!

Would you say that you have a preference between the creative process of watching a great song come to fruition in the writing and recording stages, and then getting to go out on the road and play it to a live audience?
David: For me, recording is the best thing about being in a band.
James: I prefer playing.
Aaron: I prefer playing as well. But I'm a narcissist!
Kurt: I'd be more proud to have a good record than of any one gig.
Aaron: For me, it's probably the beginnings of a tune... the first day or so when you've created it is the most exciting time, then it's playing live is next and then recording.
James: When you're in the studio, it's always the vocals that go on last and I really like it when you listen back and you properly hear it all for the first time as a recorded tune and think straight away how you can't wait for people to hear it. That feeling then of knowing what it can be and what it's going to be like live is a really good part of it.

Finally... what are the hopes, dreams and plans for the future?
Aaron: Festivals, and then we've got our own tour in Winter where we'll be playing a headline show at Albert Hall, Glasgow, Dublin, London, Nottingham.
James: The whole dream is to keep playing gigs and that people still come out to see us. We want to play in Europe and see places like Germany and Poland. We've heard that those are the sorts of places where bands like us do well. We'd like to do this as a full time career and be able to quit our jobs and completely focus on it. At the moment, it's not that we're part timing the group, it just has to fit around all of the other shit that goes on so it'd be good to be able to focus on it full time. Maybe we'd then be able to write songs that are even better than they are now, so that's the goal really. At the moment we have to get up, go to work and then do this in the evening where as we want to get up and do this all day.
Kurtis: The plan is to release another album as well.
Aaron: We're not sure what it'll be yet, whether it'll be singles or an EP, but there's four recorded already and another couple in the wings. There'll be an album at the beginning of next year. 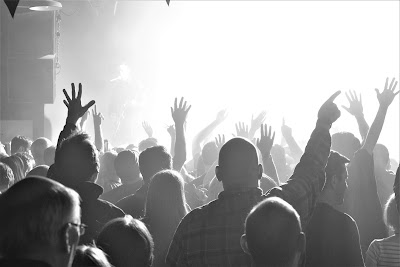 Listen to The Slow Readers Club below: