Plug is one of my favourite venues in Sheffield, and I knew from the second this line up was announced that this was not a night to be missed. Two out of the three bands were new to me, in that I'd heard many good things through the grapevine but hadn't had the chance to see them live yet; RALE sent me their debut single 'Sprinkle With Rust' over for review last month, leaving me instantly mesmerized with their philosophical, 80's tinted musical aura, and Where Fires Are have been on my radar for a couple of years now. As for headline act The Wholls... having seen them for the first time just before Christmas, I understood straight away exactly why there's such a buzz surrounding them at the moment, and why they've made a name for themselves as one of the most exciting live acts in the country at the moment. 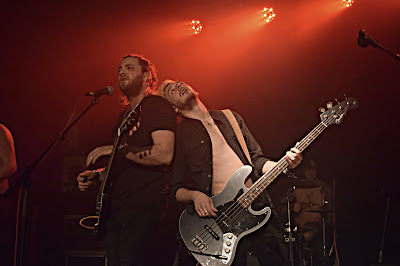 From the moment Where Fires Are took to the stage it was a whirlwind of high-powered, introspective rock, complete with galvanizing riffs and dulcet vocals. They've been on the scene now for a number of years, and that level of experience most definitely shines through in their live show; there's an incredible element of theatricality to them in the sense that each track is so intricately woven together, and performed with such fire and intensity... it's all but impossible to look away. The band appeared completely lost in the music throughout the entirety of their set, which was beautiful to see, and I think their audience were captivated too. I'll definitely be seeing these guys again at the earliest possible opportunity.


RALE are a very special band; I could start and end here with this simple statement. They are the chameleons of the music world, with no one track sounding quite the same, thus making it impossible to categorize them- or even adequately describe them... but perhaps this is the intention; in this day and age, with so many bands fighting to be heard, it's crucial to stand out... and RALE definitely stand out. Whilst some songs have an infectious air of ludic, synth-pop, complete with catchy hooks and choruses- on the other end of the scale, they have the ability to shock you with tracks that exude an almost disconcerting darkness. But what brings everything together perfectly is the way in which they perform with such dynamic force; Tom O'Hara is one of the most authentic and eccentric frontmen I have ever come across, and dances around the stage from start to finish as if his life depended on it.


The Wholls ended 2016 by signing a record deal with Sony, and with a huge European tour on the horizon, things can only get bigger. The music industry is in dire need of a band of their calibre; their delightfully erratic and intoxicating live shows are unsurpassable, and the on-stage chemistry between them is electric. This sedulous performance is packed full of anthemic, highly-charged crowd pleasers- all of which are surefire hits of the future. Frontman Arturo Cocchiarella sings with supreme verve and gusto, and instrumentally, they're all about the big, grandiose riffs. The Wholls are undoubtedly the festival headliners of the future, and it's so wonderful to see them being duly recognized and rewarded after so many years of grafting.


Every band on the line up was worthy of a headline slot, and I can safely say that this show was one of the most impressive and memorable that I have ever been to.
Posted by Fiction Is Not Imagination at 11:28