Independent Venue Week is the ultimate opportunity for music lovers to come together and celebrate live music, the small venues that are helping to keep it alive... and of course those all important individuals at the heart of it all, who are responsible for the day-to-day running and organisation of gigs and events. I don't think I've ever been to a 360 Club show and walked away without feeling as if I've witnessed something incredibly special; curator Richard Watson has a real eye for up and coming talent, and knows how to put together an unorthodox and exciting line up. Though the four acts on this particular bill could not be more different, bringing them together was what made the night all the more spectacular. 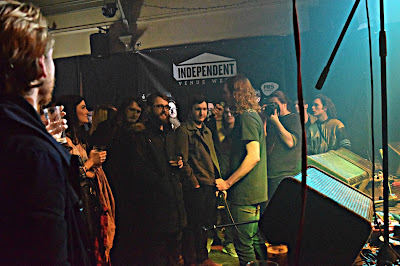 First up was Sam Wilde, who with his rich and opulent vocal tone and heartfelt lyrics had the audience in the palm of his hand from the very first note. Each track was so intricately woven together and performed with such raw conviction that it was all but impossible to look away, and I would definitely go so far as to say that Sam is one of the most impressive acoustic artists I have ever seen. An unplugged, foot-of-stage rendition of 'Last Day', a track that features on his recently released debut EP, was achingly beautiful and a striking example of both Sams' captivating abilities as a performer and of his skills as a songwriter.


I'd been eagerly awaiting an opportunity to see Bradford four-piece Glass Mountain live again; it had been almost a year since I saw them last, and with that show having been their live debut, I was looking forward to seeing how far they'd come since then. On stage, there is an air of seriousness about them, which makes for a somewhat intensifying performance... but that is by no means a bad thing; they are extraordinarily compelling to watch, and so obviously put their heart and soul into all that they do. The hightlights for me were the mettlesome 'Medicate', and what was very first release, the excellent 'Glacial'; both are complete with brooding hooks, and the intrepid vocal flair of frontman Harry Hanson. Glass Mountain are truly in a class of their own, and without a doubt one of the most exciting and underrated live acts on the scene at the moment. With a new single due out later this year, they can only continue to go from strength to strength.


The first word that springs to mind when contemplating how to describe Dusk is, quite simply, 'wow'. I've known bassist Nathan for a few years now, and though he has on a number of occasions invited me along to watch him perform with Dusk, due to one thing or another, I've never been able to make it along. I can now safely say that I have seriously been missing out. Their unique and intriguing brand of alternative electro-pop is both intriguing and refreshing to boot; electrifying synths, resolute drum beats and resonating basslines are executed perfectly by leading lady Hollys' ethereal vocals. This band are good.


Fighting Caravans were the perfect culmination to a truly triumphant night of live music. Thrilling from start to finish, frontman Daniel Clark spent more time off stage than on it, weaving his way through the crowd, microphone in hand. With their incontestably powerful stage presence, the band brought an almost hypnotizing aura of raucous post-punk fun and gave one of the most energetic, high-powered performances I've ever seen.


From the dreamy acoustic brio of Sam Wilde, to the synth-orientated extravagance of Dusk and the grunge-rock, post-punk delights of Glass Mountain and Fighting Caravans, there was definitely something for everyone and the venue was at capacity from start to finish. The proof is in the pudding; live music brings people together, and there's nothing else quite like it.
Posted by Fiction Is Not Imagination at 12:09