I've said this a few times now, but I am a sucker for some killer female vocals... and if anyone should be the number one advocate of girl power within the music industry, it's Samantha Hoare, aka the brilliant Ramona Rose. In the last couple of years, she's well and truly made her mark on the Leeds live music circuit, having appeared at a number of its' most prominent venues, including Brudenell Social Club, The Wardrobe, and more... and what better way to kick off 2017 than with a hometown headline show at The Lending Room? 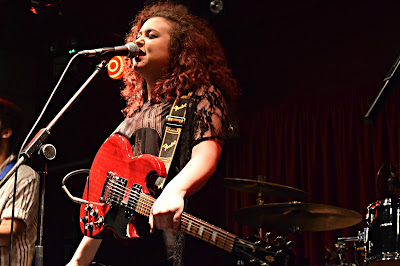 It was a dreamy night of live music to say the least, and the perfect little midweek pick-me-up! Following on from fantastic supporting bands Tropic and The Harriets, Ramona took to the stage with an endearingly confident swash and barely stopped to take a breath from there on out. Complete with intelligent, relatable lyrics and Ramonas' vibrant vocal brio, the performance was sassy, boisterous and exceedingly fun from start to finish. The band have bucketloads of unmitigated chemistry, as well as an incredibly riveting Americana, bluesy-rock aura and plenty of swagger.


Ramona has more than proved her worth as a skilled songwriter, which leaves me with extremely high hopes for her debut EP, which is due for release later this year. With her enterprising, eclectic stage presence and powerhouse vocals, I think it's safe to say that it's only a matter of time before she and her remarkable band become the name on everybodys' lips. Watch this space.
Posted by Fiction Is Not Imagination at 08:58