I always feel so at home at This Feeling shows; there's a real element of togetherness and warmth, both within and between the bands themselves and from the audiences who flock out to see them perform at shows and festivals all across the country. Mikey Jonns and his team have a real flair when it comes to spotting and supporting up and coming talent, often putting together bands that are worlds apart from one another in terms of their sound but work inexplicably well together on the same bill. One thing's for sure, it's always a great night- and I for one always walk away feeling as I've been a part of something incredibly special. 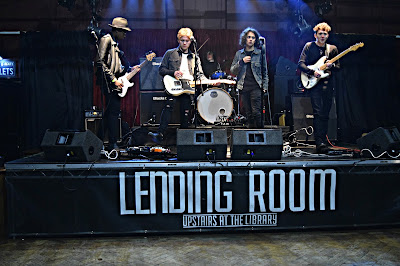 It feels as if I've been looking forward to this particular gig for a very long time; Atlanta House and Mint are two bands of whom I've been extremely fond of for a long while, and having seen The Strawberries live a number of times now, I've always been blown away by their extravagant live show. As for headliners The Blinders, their name seems to be popping up absolutely everywhere at the moment, so I was definitely looking forward to their performance.

Atlanta House were seemingly undeterred by the fact that not only were they were the first band of the night, but this was to be their This Feeling debut; the Leeds based quintet pulled off an effortlessly vivifying and spirited performance, packed full of melodic indie-pop tracks that pack some serious punch. Last years' single release 'Girls Like You', with its ludic mellifluence and infectious hooks, is a highlight and definitely goes down well with the audience. There's something about this band that leaves me feeling somewhat proud; I've known them for a year or so now and every time I see them, they've significantly upped their game. Their youthful confidence, charismatic showmanship and obvious enthusiasm for music shines through, and I think that this is but the tip of the iceberg; there's a shimmering on-stage chemistry between them, and coupled with their songwriting flair, they have so much potential to go on and achieve great things.


Seeing Mint is always a real pleasure and something I always look forward to; they truly are one of the best indie-pop acts of our generation and have the potential to become the next big thing. This was my first time seeing the band perform with new guitarist Sam Pawson, and he's definitely a great addition to the line up and a fantastic musician. Though there's certainly a huge element of fun to everything that they do, you can tell that they are incredibly serious about their art and to that end they have a dexterous skill for stylish and intelligent songcraft, as well as high-powered live performances.


I really love The Strawberries. There are so many bands out there trying to achieve the classic yet contemporary sound and image that these guys pull off so effortlessly. They exude a resonating sense of on-stage bravado and can always be relied upon to execute a polished and resplendent performance, complete with sumptuous vocals and electrifying rhythyms. What always stands out to me whenever I see them is the obvious bond between frontman Sam Neil and guitarist Joe Dines, who have such a sizzling chemistry throughout the set and often perform with their heads on one anothers' shoulders or into the same microphone. Their hypnotically swirling, atmosphere-soaked sound makes for mesmerizing watching, and there's a real variety within their music; new single 'Fantasy Machine' is a high-energy musical extravaganza and then on the other end of the scale is the scintillatingly smooth 'Laburnum House', which the band close their set with.


I saw The Blinders for the first time last year, and I'll be honest... I was uncertain as to how I felt about them; perhaps that was because I only managed to see half of their set, and so found myself at the very back of the crowd and, being somewhat small in stature, I was unable to see a great deal. I think that to properly illustrate how this particular performance made me feel it's important to stress exactly how I felt about them prior to this gig. Though I didn't dislike their sound back then, I was undecided as to whether I really got it or not. I can safely say that they've well and truly won me over now... and in a big way; from the second they took to the stage, frontman Tom with his face painted an eery black, I felt as if I was witnessing something incredibly special.


This is a band on the brink of something extraordinary, and this performance was the most wonderful culmination to an already impressive night of live music. With lyrics that exude a canorous and politically opinionated fire, it's impossible not to feel in awe of them, and intoxicated by their phenomenally powerful presence. It's refreshing, if not rare, in this day and age to find a band with so much to say and who approach such controversial topics within their lyrics in such a bold and fearless way. Complete with mettlesome drum beats, lustrous hooks and snarling vocals this was an instrumentally spellbinding thrill from start to finish.

Posted by Fiction Is Not Imagination at 08:47