Bradford based rock quartet Glass Mountain cascaded onto the music scene last year, and have been enthralling audiences with their compelling, atmosphere-soaked sound ever since. With its rapturous instrumentation and pensive lyrics, debut EP 'Glacial' was nothing short of a masterpiece, and 2016 also saw them embark on their first ever UK tour alongside the brilliant Embrace.


I'm proud to be able to say that I was present at their very first live show, back in April of last year when they supported Marsicans at Headrow House in Leeds; I was instantly intrigued and drawn in by the brooding intensity within their music, and the articulated performance that they gave that night... and so I was extremely excited at the prospect of finally seeing them live again at one of my all time favourite venues- The Lending Room in Leeds, where they were playing for 360 Club at one of the official Independent Venue Week gigs. I caught up with them prior to their performance to talk about their musical backgrounds, and the awe-inspiring experiences they've had as a band throughout their first year...

Tell me about how it all began for you guys... how and when did you first come together as a band?
Harry: I used to be in another band that William recorded. That band ended, but we kept in contact and then got together over the Summer period and started writing guitar stuff together. It got to the point where we were making songs but we wanted drums... we were trying to program it with drum pads, but it wasn't working.
William: It was an ugly experience! We knew of Jonny... he's got a reputation as being a very highly skilled drummer so we got in touch with him, invited him round and we knew within thirty seconds of him playing the drums that he was our guy. Then we were invited to do a gig with Marsicans at Headrow House last April and we panicked about how we were going to make all of these recordings that we had for our first EP sound big enough live. Harry said he had this friend at college called Lewis, so we brought him in and same again... we knew within thirty seconds, so it all came together really easily.

What did you grow up listening to and did it influence you to want to make music?
Jonny: I think we all grew up listening to different sort of bands. I listened to a lot of funk and hip hop, jazz and everything else inbetween! We're all influenced by very different things.
Harry: I like to think I like quite a lot of different music! But it's mainly...
Lewis: ... Scottish rock bands!
Harry: Yeah, I went through a phase of listening to Scottish rock bands.
William: I think the common thing that we all like is alternative rock, especially from the 90's... like Weezer, Nirvana, Pavement, Pixies, Fugazi, Smashing Pumpkins, Flaming Lips... just kind of good quality alternative rock. We've got really broad tastes. There's two types of music, good and bad, that's the thing... and if you're locked into just one genre, it really limits your approach to making music.

You obviously spend a lot of time together... what have you learned about one another since you started the band? Has anyone got any bad habits?
Jonny: I don't think anyone has any annoying habits, really.
Lewis: Jonny really likes food. It's not annoying, it's just an observation.
Jonny: These guys really like gin! It's not annoying as such...
William: Yeah, but people notice it. We've spent the last two days shooting our next video... we've been everywhere from Dalby Forest, to the North York Moors, to Spurn Point. After a really gruelling two hour drive to Whitby, the first thing me and Harry did was have two pints and two double gin and tonics! You could see the director raising his eyebrows as if to say 'guys you've got a 6am start tomorrow!' We're professionals...
Lewis: We haven't actually known eachother, together, all that long though. I went to college with Harry though so I've known him for about three years and then the rest of these guys I've known for about a year.

Festival season is coming up... if you could put together your dream festival line up, who'd be playing?
Harry: The Cure, The XX... that's the only two bands I listen to!
William: Loads of bands who have split up or are no longer with us due to death. Frank Zappa would be amazing, I only got to see him once and it wasn't a particularly good gig because I saw him at Birmingham NEC and the sound in there is like playing in an aircraft.
Lewis: Flaming Lips, but with Ronald Jones.
Jonny: I think Radiohead should be on at this festival as well.
Lewis: And The Beatles would open it, on the introducing stage. BBC Introducing!
William: We won't be playing though, we'll curate it and just walk around drinking gin and getting pictures of everyone.
Harry: At our festival you'd be allowed to walk around with glass.
William: Yeah, you can't justify drinking gin out of a plastic cup, it's just wrong.

Is there anywhere, whether that's a particular venue or perhaps a certain city you've just always wanted to visit, that you'd love the opportunity to play but haven't yet?
William: We'd just like to travel. There have been vague discussions of us going to Chicago in June which would be amazing. It'd be lovely through the Summer to play loads of festivals, especially across Europe... you can soon get fed up of just this tiny little island!
Harry: I'd like to play a few more dates in Scotland. Scotland is cool.
William: The Scottish fans are really enthusiastic and you're made to feel special whether it's a big crowd or a small crowd... you can tell that they just really appreciate you making the effort to go there.
Lewis: We haven't done the main room of Brude yet... we've done the Games Room and we've played the main room in other bands that we've been in, but to do that together would be good. 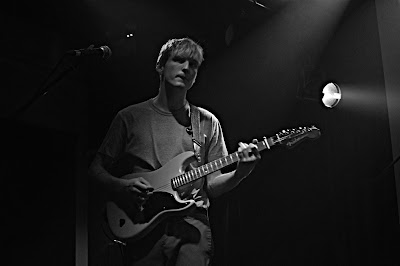 You've did a fair bit of touring with Embrace last year who have obviously been around a long time... did you learn anything from that experience?
Jonny: They like to swear at their sound engineer a lot!
Lewis: It's a tight ship. I think us as a band are all really tight as well so we got on really well in terms of loading in and out, and all helping eachother out and stuff. It was a very communal vibe, which was good.
William: They let us travel on their tour bus, so we were just living on a big travelling hotel with a well stocked fridge, really! Lots of beer and gin... and a nice music system.
Lewis: Last night I threw up on Jonny's shoes and he had to bin them... that was red wine though, not gin.
William: But yeah, it was a really amazing opportunity because we found ourselves playing to several hundred people every night rather than fifty or sixty. The venues were amazing, the crew were amazing, the PA's were spectacular so we were spoilt. To go on your first tour and actually be able to do it on a tour bus rather than in the back of the van and sleeping on floors was great.
Lewis: That's the thing about the Embrace crowds as well, they'll come down at doors and watch the support bands too.

Music aside, what other hobbies and interests do you all have?
William: Apart from gin... we like hanging out, that's good. When we're on tour we just get up every day, get off the tour bus and go and explore the city for a little bit because you generally have four or five hours of waiting around. So rather than sitting in the dressing room we try and see a little bit of every place. We went to the seaside when we played in Portsmouth and the sun was out. We like art, we love curry! We like movies... we like planning. There's a lot of stuff to think about when you're in a band, especially if you're not signed to a label. There's always lots of things to discuss.
Lewis: We've started a google calendar so that we've all got this one shared calendar with all of our gigs and stuff in it. I got really excited when I was making it and putting all these dates in!

Is there any one song that you've written so far that you're either most proud of or means the most to you lyrically?
Harry: The next single that is coming out in March is definitely a step up from what we've done, so I'm proud of that. There's a new thing that we're jamming at the minute which is really good. With the EP, I'd had those lyrics for maybe two years before... I write loads of stuff in my phone, so I don't really know which means the most lyrically.
William: I think from the things that we've released so far that we're probably most proud of is 'Glacial'. We'd had so many discussions about whether or not our first single should be so slow and should be seven minutes long... there's a minute and a half before you even get any singing. But then we thought it's nice to not move with the pack and try and do your own thing. We're trying to keep that going. We do hear a lot of bands who seem to be trying to do the same thing... they see somebody who's doing really well and they all want to hop on the bandwagon. It's not really a good, creative way to do things really.
Lewis: It stalls everyone in that scene when they all start trying to be like eachother. You just don't get anywhere.

Are there any big plans in the pipeline for 2017?
William: We've got a single coming out on the 17th of March, and we've got a six day tour in March to promote that. We're doing issue 2 of our magazine which will have lyrics, photographs and a brilliant gin and tonic recipe!
Harry: And a Bloody Mary recipe. I forgot about that, we really like Bloody Marys.
William: I think people are now moving away from just having digital downloads and want physical content, so we thought rather than just selling them a CD or a piece of vinyl, why don't we give them a bit more and put the CD in the back of a magazine. So that's taking a lot of time to do but it's also really fun piecing it together. There's talk of a few festivals but everything's still a bit up in the air. We're going to release EP 2, hopefully around September time. If that goes well, at the end of the year we'll put EP 1 and EP 2 on a piece of vinyl and do a package with a lyric booklet and everything. So that's enough to be thinking about! Hopefully the singles will do well and the diary will fill up. That's the plan! 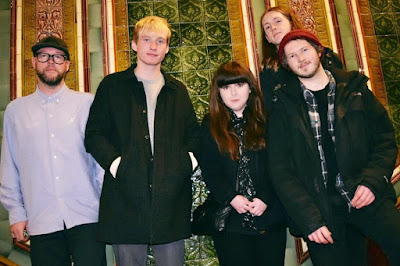 Posted by Fiction Is Not Imagination at 11:21