It's refreshing to find a lyricist so honest and down to earth as Frankie Dean, otherwise known by his stage name, Franko Fraize; hailing from Thetford in Norfolk, he's effortlessly redefining and putting his own stamp on rap culture. He has become known and loved for his energetic live performances and comical crowd interactions between songs, and throughout the course of 2016 was a regular feature on the live music and festival circuit- with appearances at the likes of Reading and Leeds festivals' under his belt- plus a live session at Maida Vale for BBC Introducing. Frankie is undoubtedly a hardworker and incredibly passionate about what he does, and that has not gone unnoticed; he has received praise from the likes of Mike Skinner (The Streets) and Wiley, as well as support slots with The Enemy and Reverend and the Makers. 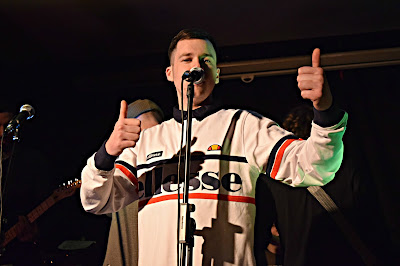 Musical talents aside, Frankie is a total gentleman and you literally could not wish to meet anyone more humble, or friendly, than he is. I had the opportunity to speak in depth with him about his experiences prior to his recent headline show at Oporto in Leeds...

How and when did you first get into music and songwriting?
I feel like with music and songwriting, it was never me deciding to do it... it just happened. I was listening to a lot of rap music, but I didn't feel like there was a voice for UK rap. This was when I was really young... I didn't play instruments or anything, I was just writing these lyrics when I saw the avenue emerge and UK hip hop start to get a little bit of a scene. People were talking and rapping in a British accent, making tunes in their bedrooms and making videos and it started to get a little bit of heat... when I saw them lot doing it, I felt like there was an avenue for it all of a sudden. I was about 13 I started writing lyrics, but it wasn't until I was about 19 when I started to see that there was legs for it. I've had some blinding shows, and the thing is it's been a very natural process... and that's why it's beautiful. I've never tried to do any of it, and I don't mean that in an arrogant sense... I've treated every little thing as an enjoyment of my life.

What did you grow up listening to and would you say your musical tastes and influences have changed much since then?
I feel like I've been brought up on British culture, my old man played me The Specials, Billy Bragg, The Clash, The Jam... I always felt like he taught me things about the time, like Billy Bragg was quite political, The Clash were talking about life and The Specials were very socially concious. For me, getting that influence taught me about what was good about British music. When I got older I got that everything I was listening to that I liked and saw something in was because it was telling a tale about the life and times back then. I got into rap music but at first that was very American for me until I found UK people talking about England, especially grime. I feel like grime is getting a lot of heat right now, and it's been a long time coming. I feel like grime music was the punk of our generation, talking about life right outside our front door and I think that resonated with the kids. When people see me live I feel like the good thing about what I do and what makes it different is that I bring the band in, and I think the reason for that is due to what I grew up listening to. At the time I started making music, if you rapped over just a DJ you were put in a box straight away and I didn't want that. I started playing with the band so that people like my dad and his generation could think that it was something suitable for them as well. I've broken down so many boundaries with it, which has been great. One of the biggest influences for me has been Jamie T... he walks out on stage and he's very British. You see this very British guy who could easily live down the road from you, and you don't feel like when he sings the song and goes home he'd be any different. A lot of these rappers, you feel like they're putting a rap hat on and then taking it off when they go home and I didn't want to ever come across like that.

When it comes to packing to head out on tour, what are the essentials that you can't go without?
I wish I knew... honestly, that's my trouble! I get on the bus and I'm like 'What have I forgot?' I think a nice, clean pair of boxers- especially my lucky pair! Some nice warm clothes because you always forget how cold it is, and just your essentials really... make sure you've got a toothbrush and some deodorant, because everyone likes a bit of cleanliness!

Do you have any musical guilty pleasures?
80's synth pop! I love 80's synth pop. It's influenced me in a big way, because I feel like when I was trying to bridge the gap between electronic and band music, there was a band called New Order. Listening to them and seeing the way that they turn guitar music into the rave crowd lead on to me getting into some really mad stuff... so George Michael, The Wham and all of that. Variety is the spice of life as they say! 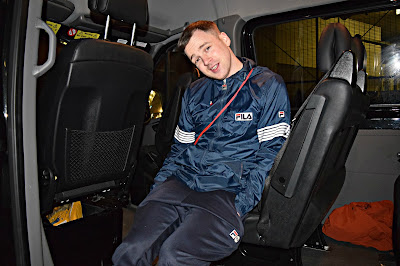 You supported The Enemy on some of the dates on their farewell tour last year; what was that experience like?
It was massive. The Enemy for me, especially 'We'll Live And Die In These Towns', spoke for a generation. Every song on there really captures something in your life, so from going to being a boyhood fan to getting a support slot with them was crazy. The first show I did with them was in Portsmouth, and Tom came up to me and we had a chat... they were my idols, so it was a big deal. One of the things I realized straight away was how good they are... for a three piece to bring that much noise is unbelievable. I could not believe it. It was a real eye opener, and gave me a bit of confidence that I've come from a town in Norfolk to supporting The Enemy and feeling as if they're my friends. I was very grateful for it. Tom is a very genuine guy and he really does call it how he sees it, which again was a very influential thing for me. He's very much a 'heart on his sleeve' type of character, which is a beautiful thing. He'll tell you this, that and the other... he'll support new music, but at the same time if he doesn't agree with something he isn't scared to say it.

Is there anything that you've done so far, whether that's a particular song, a certain show that you've played- or perhaps something else entirely that you are either especially proud of or feel has been instrumental in getting you to where you are today?

There have been so many... I could sit here and go on for hours about it! In a soppy way, I treat so much of this as a blessing, and I still look upon everything as a music fan. From getting to support The Enemy and Reverend and the Makers, to Wiley tweeting me the other day. I grew up listening to grime music, so to have Wiley who is one of my biggest influences tweet me and tell me he likes what I'm doing was a huge deal. If you come into the industry from every walk of life and see everything as a blessing, then you'll get so much from it.

If someone were to make "Franko Fraize: The Movie" who do you think would play you?
I'd say Tom Hardy because the girls love him! Really it's more likely to be that guy, what's his name? From The Football Factory... Zebedee. Google it and you might have a little chuckle!

Have you ever had any weird or embarrassing situations arise at gigs?
Touch wood, not really. But that might be because I don't take it seriously enough to be embarrassed! If I spilled some beer on stage or tripped over, I feel like the crowd would be right there with me. I really hate talking about myself because I feel arrogant but I do feel like when I'm performing, especially for the first couple of tunes, it's important to let the crowd know that we're in this together and all singing from the same hymn sheet.

If you could time travel for a day, where would you go and what would you do?
I'd probably go to some notorious event to see how it felt. With all of the mad stuff that's going on at the moment, so stuff like Brexit and Trump... when you're in these moments in history, they don't necessarily feel like moments in history but when we pass this information down to our kids and grandchildren, they'll see it so much differently. I'd like to go back to the Winston Churchill 'fight them on the beaches' speech and see what the energy in the air was. Saying that, I love everything about my life right now so I'm not one to think too much about going too far forward or too far back. I take every day as it comes, treat each one as a blessing and I love every second of it.

Finally... what does the future hold for Franko Fraize?
I feel like this year is going to be a very good year for me in terms of presenting what I do as Franko Fraize, if that makes sense. In years gone by I've had to learn so much in a trial and error sort of way and see what works. I've had an album that I've been sitting on for the best part of two years, so I'm excited to get that out. I don't feel like I've ever really made any mistakes, so it's not about doing it right this year or anything... I just feel like it's about taking what I've learned and really putting it in place. 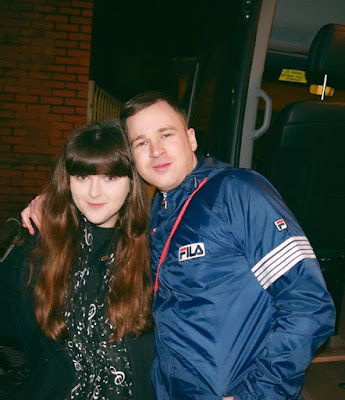 Check out this live video of 'Running' below:

Posted by Fiction Is Not Imagination at 11:41