Atlanta House are the Leeds based indie-rock quintet made up of Matt Hirst, Connor Carbutt, Jake Ingleson, Nigel Ngwenya and Luke Williams. The band have been together for three years, building up a reputation by way of playing shows mostly in and around their home city- plus festival appearances, as well as support slots with the likes of Marsicans, King No-One and The Barmines. 2016 saw them release their excellent debut single 'Girls Like You' to huge acclaim, and with studio time planned in the very near future, we can hopefully expect more of the same this year. 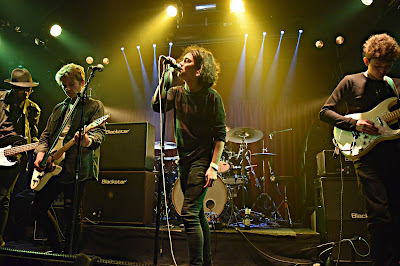 For such a young band, they have an exceedingly polished sound, as well as a talented songwriter in frontman Matt. They're charming, fun to be around... and it was great to finally get an interview in with them prior to their recent Leeds show for This Feeling after having been planning it for the best part of a year!

Tell me a little bit about the story of Atlanta House... how did it all begin and how long have you been playing together?
Jake: Going on three years.
Luke: I was in a band before Atlanta House and we split up. We'd had some difficulties with some of the members, and we ended up gravitating towards other things. Us lot did this Christmas show at school, and I saw that they could play... I asked Matt first one day on the way to school if he wanted to be in a band and it started from there.
Matt: It was just us four at first, and then we got Connor in on drums.

What are your earliest memories of music?
Matt: My mum decorating the house and putting tunes on! A lot of motown stuff.
Jake: Music has just always been around for me. My sister plays drums so that got me into music. I just followed on from that, really.
Luke: I remember I used to go round to my cousin Richards' a lot and he showed me my first riff on classical guitar. He was listening to a lot of Breaking Benjamin and stuff like that. That's what started me off and it just went from there.
Nigel: My first memory of playing music was playing in my churches' band. That was always a big jam, really!

You supported Circa Waves in Leeds last year. What was that experience like and did you learn anything from them?
Connor: We learned not to get Matt too drunk!
Matt: I do get quite annoying! I just get loud... way too loud...
Jake: They were the best people we've met, they were just so nice and they weren't intimidating or anything... it felt like we'd known them for years! They're really nice guys.

This being your very first show with This Feeling, how have you been preparing?
Nigel: Practise, practise, practise. We've been trying to get everything solid and nailed down.
Jake: Listening to the set through the day so that it's just drilled into us... hopefully!

Do you plan practise sessions regularly, then?
Luke: We get together every Monday and Tuesday.
Jake: Yeah, twice a week... sometimes more if we can.
Matt: No one turns up on time though! 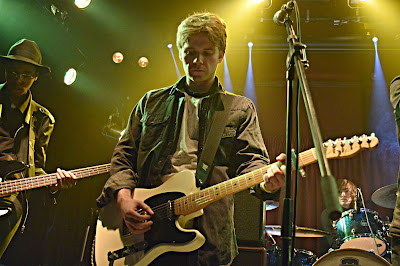 You've obviously played a lot of shows in and around Leeds, but is there anywhere you'd love the opportunity to play? That could be a particular venue, or perhaps just somewhere you've always wanted to visit as a tourist.
Connor: Leadmill... main room!
Nigel: If I could pick to play anywhere, it'd be Wembley Arena! We're planning world domination.
Jake: Nah, we already play there twice a week!
Luke: First Direct Arena would be great.

You guys seem extremely close, and obviously spend a lot of time together... what have you learned about one another since you started the band?
Matt: That Nigel sleeps with his eyes open...
Nigel: That's a true fact!
Jake: Matt is an alcoholic and Luke loves metal.
Nigel: I've learned that Jake cannot not go to the toilet every 5 minutes!
Jake: I do go about three times before a gig...
Connor: When we played Wardrobe after me and Nige had already walked on, he decided to go to the toilet then!
Jake: I just like to be fashionably late on stage!

If you could time travel for a day, where would you go and what would you do?
Nigel: I'd go right to the very beginning of the universe, just so I could know what was there before.
Jake: I'd go to the day Nigel was born.
Connor: And stop it from happening?
Jake: Yeah.
Luke: Do you remember that thing that Rage Against The Machine did in America? They started a massive riot and started playing in the middle of Wall Street. I want to go there!
Matt: Queen at Wembley Arena. That's where I'd go.

Tell me something about Atlanta House that no one else knows...
Nigel: There are a lot of secrets! We do have one enemy. It's another band, but we can't disclose who because we don't want to start anything. They fucked us over, though. They're not decent people. 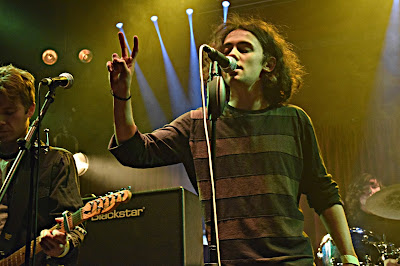 When you're putting a new song together, do you start with the lyrics or do you play a melody and then try and find words that fit?
Matt: It's different every time.
Connor: It did used to be just Matt, but it's changed.
Matt: Yeah, it's become more of a full band thing now... so sometimes we'll get some music down and then I'll add lyrics or sometimes I just do it seperately.

If you could live inside any television series or movie, which would you choose and why?
Jake: Drake and Josh! That house is huge. Or Breaking Bad. Or a mix up of the two!
Matt: I know mine! It's Always Sunny In Philadelphia. It's the funniest thing I've ever seen in my life!
Nigel: Fresh Prince of Bel Air.
Luke: I'd rather not live in just one and be able to hop between different ones.
Matt: Are you gonna visit Hogwarts, Luke?
Nigel: Ah, I forgot about Harry Potter!
Connor: Probably the film Airplane. It's just so funny.

Music aside, does anyone in the band have any quirky interests or strange talents?
Jake: We play a game called Runescape.
Matt: I'm not special, so no.
Jake: When I was young I ate a slug.
Matt: Is that a talent or an interest?
Jake: Neither, it's a habit.
Nigel: No, Jakes' interest is butter.
Jake: Two tubs a day.

What are your hopes, dreams and plans for the future of Atlanta House?
Nigel: There's only one thing I'd say and that's just never to be bored.
Jake: To be able to drop everything and just do the band!
Matt: That would be the ideal life! 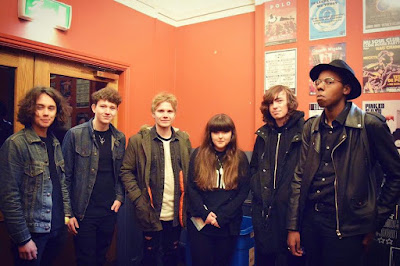 Posted by Fiction Is Not Imagination at 11:03