As far as music venues go, The Basement is somewhat unusual; it's located beneath a cinema in beautiful central York... a little unconventional perhaps, but I really loved it. I always look forward to seeing Leeds based quintet The Indigo Project live; I've seen them a number of times now, and they improve irrepressibly every time I do. Their stylish and masterful brand of indie-pop has earned them a legion of loyal fans both in and out of their hometown, as well as support slots with DMA's and Ocean Colour Scene, plus numerous festival appearances (including the legendary Reading and Leeds last year) since their formation in early 2015.


It was always going to be a notably triumphant show, and the band definitely had a lot to celebrate; their first ever headline show in York was sold out, and this came just one day after the release of resplendent new single 'Suburban'. From the second they took to the stage and launched into 'Loosen Up', they had their audience in the palm of their hands and pulled off an dynamic, note-perfect performance. Their set was the perfect blend of both old and new music, which displayed just how far they've come in the year since their debut EP was released. Their youthful confidence, coupled with an incontestably powerful stage presence and charisma aplenty leaves me in doubt that The Indigo Project are well on their way to sealing their place as one of the most exciting live acts around. 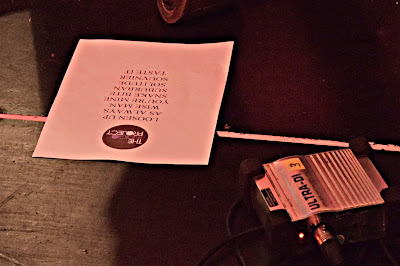 Special mention must go to supporting band, York based Cry Baby, who seriously impressed me with their polished and ebullient performance and have one of the most incredible drummers I have ever seen. Throughout the course of their set, they threw a couple of covers of well known indie-rock anthems into the equasion... but I definitely think they're good enough to pull off a great performance without any covers incorporated into their set, as the quality of their own music is incredibly high. It's always refreshing to see a young band with such zeal and promise, not to mention a real knack for songcraft. I look forward to seeing what they do next.

Posted by Fiction Is Not Imagination at 11:34