It's somewhat difficult to categorize London based Gillbanks, lead by the talented Sam Gillbanks,  into any one genre; their music is irrepressibly nonpareil, and so different from track to track... but perhaps that's what gives them that 'edge' and what makes them so undeniably special. It's grunge tinted rock of the highest calibre, with hauntingly pensive lyrics, perfectly executed by Sam's suspensefully hazy and stirring vocals. From the searing heights of 'Anxious', to the swirling, spellbinding beauty of the heartwrenching 'Lived In', one thing is for certain... from the moment you listen, you never forget. 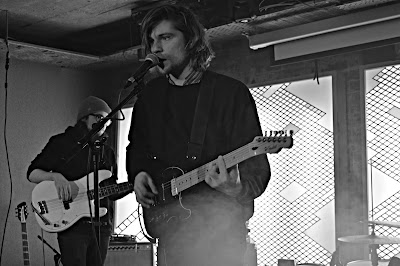 There's something that I find inexplicably captivating about Sam as a performer; I saw Gillbanks perform for the first time last May at Gold Sounds Festival in Leeds... he was already on stage when I arrived; I was mesmerized from the word go, and walked straight through the door and straight to the foot of the stage. Suffice to say, I've been hooked ever since, and so when the announcement came that he was set to support Halfnoise at Headrow House (the day before my birthday, no less) I just had to set up an interview with Sam to find out more about his extraordinary work and musical roots.

What did you grow up listening to, and would you say any of it inspired you to want to make music yourself?
Definitely. I mainly grew up listening to music that my mum used to play me in the car... so that was like The Beatles and Nirvana really. They ended up influencing a lot of what I decided to do. It naturally progressed from that. From a very early age I was heavily interested in how the guitar sounded, so that's where that stemmed from.

Was that from quite an early age, then?
I didn't realize that I really wanted to be a musician until I was about the age of 12. I decided to learn the drums... well, the first thing I decided to learn was the guitar and I didn't really do too well with it because my hands were so small! So when I was 12 I decided to get drum lessons, and from that I moved on to bass... then went back to guitar again, and started singing

In terms of your creative process and bringing a song to fruition, what generally comes first... the lyrics or the music? Or is it different each time?
I tend to do music first. I do it on my own... it's a very isolated situation! For now anyway... that may change in the future. I will always have an overall idea of how the lyrics will fit into it.

Is there any one song that you've written so far that you're either especially proud of, or lyrically means the most to you?
I'd say a song called 'Lived In', which is the b-side of a single that I released last year, is probably the most meaningful song I've ever written. It means quite a lot to me.

Is there anywhere - whether that's a certain venue, or perhaps a particular city that you've just always wanted to visit- that you'd love the opportunity to play?
I've always wanted to play in Scotland and we are playing in Glasgow on this tour, which is going to be great! New York would be amazing, too.

What would you say are both the highs and lows of being on tour?
Money and lack of sleep are probably the two lows. Highs... being around people that you want to spend time with, and being able to play the music that you've created in front of people who have never heard it before, and then receive good feedback. I'd definitely say the highs outweigh the lows. 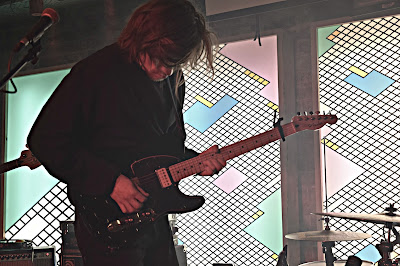 You've not only written, but produced and recorded much of your own work yourself; would you say that having such a DIY approach to making music has helped shape you into the artist you essentially want to be?
I haven't really had a choice, so yeah. I think any artist that creates music and does everything themselves will generally appreciate what they're doing more and take a different approach to what they're actually creating, rather than someone actually fuelling what they're doing with money. I feel like I have a lot of freedom, but obviously it is frustrating knowing that there are people who receive a lot of financial benefit, whether that's from family or from people that they know... but it is more rewarding when it comes from yourself.

Do you have any quirky interests or hobbies outside of music?
I don 't think I do, really! I have stories to tell but I don't think they're very parental advisal really! I wouldn't say they're hobbies though! Outside of music, obviously I have to fund myself so generally my time is taken up by work... I work in a bar, which is also a venue. That's good fun. I don't actually get much time other than that. Every now and again I'll take a complete break from everything and just relax... that's the most important thing for me to do.

When it gets to this time of year, I think festival season starts to be on every music lovers' mind... do you have any fun memories of festivals, either of playing them or just attending as a punter?
Glastonbury last year! I'd never been before and then we had the opportunity to play... that was really awesome. I saw LCD Soundsystem on the Sunday, that was a highlight. We were camping near the Park Stage.

If you could travel back in time, where would you go and what would you get up to?
I think I'd go back to when I was an 8 year old and tell myself to chill out a bit! But I'd like to go back to the 60's... 60's London, that'd be great. I'd have a whale of a time! A lot of the music that I'm influenced by comes from the 60's, and we've all watched documentaries and stuff about how people lived their lives back then. There was obviously stuff going on in politics excetera, but there's always going to be things like that going on... it just seems like everyone had a bit more of a free spirit in a way that we don't so much see now. Everything now is way more money driven, and it just didn't seem to be a problem for musicians then.

Finally... do you have any big plans for 2017?
We've got a release coming out, but I'm not sure when. We're releasing a couple of tracks and I'm also in the process of recording our EP which will hopefully be out this year but if not, early next year. It depends on everything, really! It's never normally my choice about when we release things... so we'll see how that goes! 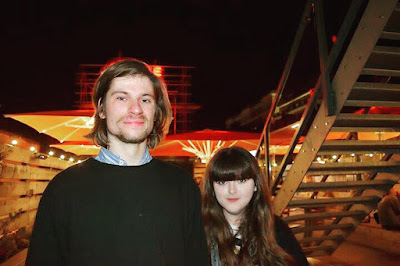 Listen to 'Anxious' by Gillbanks below:
Posted by Fiction Is Not Imagination at 10:01