Since they spiralled onto the music scene just two months ago, The Opera Comic have proved tenfold that they are one of the most exciting and creative new bands on the block; rather than merely make a simple announcement, they released a mysterious spiral image online which subsequently circulated in and around Leeds by way of posters and flyers... thus intriguing us all, and doing so whilst remaining completely anonymous the whole time. When on the first of October the band finally launched, their debut single was every inch as interesting, quirky and extravagant as I'd hoped it would be, and so I was extremely excited when they announced a debut Leeds headline show at Brudenell Social Club. The night was put on by the brilliant Scruff Of The Neck, and with a bill boasting three equally brilliant up and coming bands, it was always going to be a fantastic show. 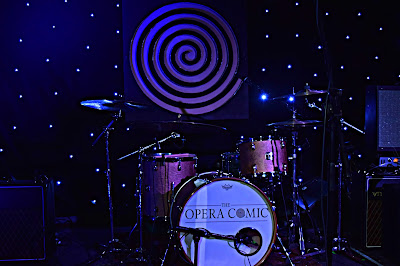 First up was The Doldrums; now anyone who knows me will be aware of the fact that these boys hold a very special place in my heart, but the excitement of seeing them this time was somewhat bittersweet. Ollie Trevers has been with the band on joint frontman duties since day 1, but this was to be his final show. When I saw them live for the first time a couple of years ago, it was his incredible vocals that really stood out to me and drew me to them, and admittedly there was a couple of occasions throughout the set where I teared up a little. However, the performance was as effervescent and spirited as I've come to expect from these boys, and there is absolutely no doubt in my mind that they'll return bigger and better than ever before in 2017. Best of luck in the future, Ollie.

I've been hearing about Manchester based quartet Larkins a lot of late, but this was my very first time seeing them live. They have an incredibly ebullient sound; it's fun, infectious and generally smile inducing- which I loved, and they have an impressive air of charismatic on stage confidence. Their incredibly lustrous performance was delightfully irrepressible, and left me wanting more. I look forward to seeing these guys again in the future, and with such a commercially appealing sound and image I think 2017 will definitely be a great year for them.

From the second The Opera Comic sauntered on stage, I knew their performance was going to be a memorable one. Though I don't like opinions based too heavily on looks when it comes to bands, it must be pointed out that these guys are seriously suave; they look like the kind of band that you can picture playing to sold out crowds at festivals, or appearing on the cover of music orientated publishments far and wide... but they don't just look the part; from start to finish, their set was packed full of youthfully ludic and irresistably melodic tunes that become implanted in your brain and all but feed your soul. Frontman Luke Thompson's vocals are scintillatingly smooth, and with well executed and endearingly spirited instrumentation backing him up from every single member of the band... well, it may be somewhat cheesy of me to say, but the performance was undeniably note perfect. I very much felt that this was one of those gigs that will someday be a real "I was there," kind of moment. There was such noticeable chemistry between them, who are so obviously well matched with one another and clearly have built the foundations of their band upon incredibly strong friendships.

The Opera Comic had a somewhat unconventional start to their journey as a band, but that's what has made them stand out from the crowd; they've proved to us all that they have no intention of doing things by the book, and I'm sure they'll continue to surprise and enthrall us every step of the way.
Posted by Fiction Is Not Imagination at 11:38