It's been a busy few months for Caleb Smelt, Jacob Beaumont, Richard May and Harris Slater, aka The Wired; 2016 has seen the release of two single releases in the form of "Lost It As You Were Leaving" and "Long Lost Days", as well as a string of high profile live appearances, one of which was a much coveted slot at Leeds Festival back in August... so what better way to end such a successful run than with a headline show at one of Sheffields' most loved venues, The Leadmill?

For such a young band, they have a real talent for zealous, well executed songcraft and their live shows are just as articulated and impressive. They have their own unique and recognisable styling of indie-rock, and from the moment they took to the stage, they gave an exceedingly powerful and gripping performance. Frontman Caleb's gritty vocals most definitely command attention, and are even somewhat wistful in places. Instrumentally, I was particularly drawn to the mettlesome drum beats from Harris, which were unwaveringly resolute throughout. This band have such a galvanizing stage presence, as well as good dynamics and chemistry and I am left with no doubt in my mind that they have the potential to be the next breakthrough guitar band. 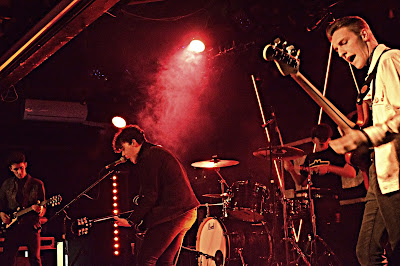 Sheffield is a real hub for up and coming musical talent at the moment, but The Wired are most definitely a jewel in the crown. It was a pleasure to be able to catch up with 3/4 of the band prior to this most triumphant hometown show, and find out a little more about what makes them tick...

Where did you guys first meet, and how did the band first come about?
Richard: We all met at sixth form college. Our best mate started a project, which basically got us forming a band just to record something for his course and it just took off from there really. The original guy then left and we got a new drummer.

What did you grow up listening to and did any of that inspire you to want to start making music yourselves?
Jacob: I'd be lying I think if I didn't say all of the indie type stuff... when we grew up and when we first started listening to music in about 2007 or whatever, that's when there were loads and loads of indie bands just coming out, and I think that's just what inspired us. Or me, anyway! Arctic Monkeys are definitely one of them. It might sound boring saying them, Oasis and all of that... but it's true.
Richard: More recently I've been into a band called DMA's, as well as Richard Ashcroft.

The Leadmill is a pretty iconic venue, and I'm sure a really great one to play... but is there anywhere that you'd like the opportunity to gig, but haven't had the chance to thus far? That could be a particular venue, or maybe just a certain city you've always wanted to visit.
Richard: I want to play Boardwalk, now that's reopening.We haven't been to Liverpool yet, either.
Caleb: I want to play Roundhouse in London, that would be pretty special. We want to play Glastonbury.
Jacob: ... And as many festivals as we can! 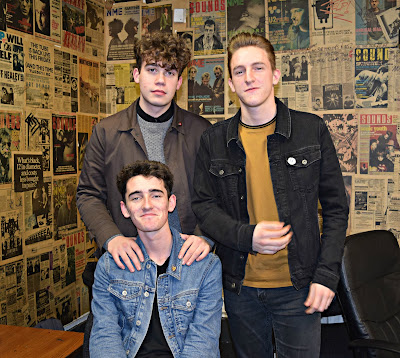 I can tell that you're a band who are in their element when performing live- would you say that your live performances capture a completely different side to the band than on recordings?
Richard: Yes, 100%.
Caleb: I think we're a lot better live.
Jacob: And with a lot of bands it's the other way around, and recordings sound better... but I genuinely think we're a lot better live.
Caleb: There's a lot more energy and soul when the songs are played live. We don't just stand there, play, and walk off... it's all got feeling behind it.

I know you've done a few festivals over the course of the Summer; I don't think you can beat that relaxed, friendly festival atmosphere... do you find that, as a band, there's less pressure in playing festival sets than with headline shows?
Caleb: When we played Leeds Festival, it was just like a party! You obviously know people are going to be at Leeds Festival, but if it's your own gig you worry whether or not people will care enough to come!
Jacob: At Leeds it was literally one band off, another one on... there's none of that waiting around with nothing happening that you get at headline gigs, which is always the worst bit. If it's all happening, like with festivals, you can just watch whoever you want and everyone is up for a laugh.

Music aside, what other interests do you have?
Jacob: Football! And cracking bones... me and Caleb would love to go to a chiropractor and have our backs cracked and stuff, I just think it'd be reyt good!
Caleb: Jacob likes Strictly Come Dancing.
Jacob: It's the final tomorrow. They're all going out, but I'm not. I have been invited out, but I'm not going... I'm watching Strictly, because it's reyt good.
Caleb: Our drummer... he has two things in his room, a beige golf cab and a big bottle of organic juice.
Jacob: He's weird! We've got this brand new practise room, which the drummer sorted out. We got there, and he had incense all over the tables... he had some weird bottle of alcohol but it had a tree inside it. He asked for some rent, so I gave him some money and then the next time we went in there's this massive tapestry on the wall. He's just reyt weird, but we love him!

Are all of your songs written from personal experiences that you've had- and is the writing process a collaborative or solitary effort?
Caleb: They are all personal, yeah. Lyrically it's all me, but then Jacob does some guitar stuff and it comes together. But yeah, they've all got feeling behind them, which does come across in our live set. For music to have soul, it doesn't have to be soul music... to be soulful, it just has to come from the heart! We were in the car earlier and they were playing this song... I don't even know what they were singing about, who buys into that crap? People want to hear something that they can relate to, and that makes them think 'I like them, because they're singing something that has happened to me.' That's what people want to listen to.

Is there anything that you've done so far, whether that's a particular track or maybe a certain show that you've played, that you're especially proud of?
Caleb: Playing Leeds Fest. Tonight... if it goes well! Last time we headlined Leadmill, it was in the small room, and this is our first proper headline show since then. The small room holds 250, and I think about 800 tickets have been sold for tonight, so it's a big jump for us in a year and a half.

... And in turn, what would you say has been the biggest learning curve to date since the band started out?
Richard: Going to places like York and playing to one person...
Jacob: Basically we went to York to have a bit of a practise session. We turned up to this pub and this guy with army trousers on was sat there like 'it's alright, this!' It was so funny.
Caleb: You need those gigs though, and then when you do nights like tonight... it makes them more special. If you walk out to hundreds of people, after having played to just one person a while back, it makes you feel good. It is what it is.

Do you have any exciting plans for 2017 that you can talk about at the moment?
Caleb: We'll be doing a tour, and hopefully loads of festivals. Basically just gigging... this year has been a bit relaxed. We've got a tour booked for February till April. We're doing two massive, back to back Sheffield shows... no one else has done anything like it, so it'll be big if we pull it off.
Jacob: What are you on about here?
Caleb: Have I not told you about this?
Jacob: No!
Richard: You'll have to wait and see! 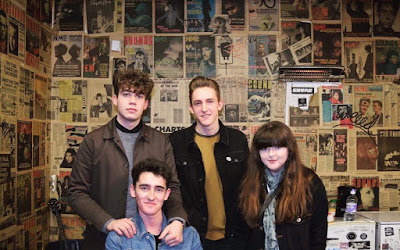 Posted by Fiction Is Not Imagination at 11:43