There's something inexplicably enchanting about Paves; I think that perhaps they have to be seen to be believed, but from their spellblinding and unexampled bluesy-rock sound to their mesmerizing live performances... one thing's for certain, once you do see them, they're impossible to forget. The band is made up of frontman/guitarist Luke Shield, lead guitarist Mike Whitaker, drummer Tom Triggs and bassist Perry Read. They've been playing together for a while now, under a couple of different names (they were formerly known as Thieves, and then as Smokey Taboo) before they began their journey as Paves back in 2015. They've been extremely busy since then, with tour dates up and down the country as well as appearances at a number of high profile festivals over the course of the Summer (Reading & Leeds, Y Not and Isle Of Wight to name but a few), and they're just about to embark on a string of live dates supporting Starsailor. 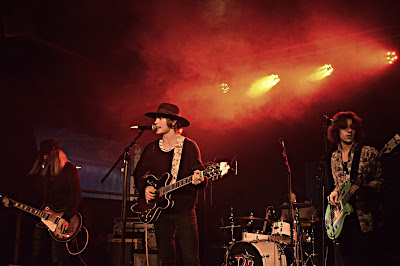 This year also saw the release of a brand new track, in the form of the sizzling 'Take Me While I'm Here' and with plans for an EP release in early 2017, things look set to get even bigger for this London based quartet. I was able to catch up with the band when they came to Sheffield recently to play at Plug for AMP Live... a real honour, as they are undoubtedly one of the most exciting and promising new acts in the country at the moment.

I know you've been playing together for a while now, under a couple of different names before you settled on Paves... but where did it all begin, and how did you first meet?
Luke: I first met Mike at university, we went to Queen Mary in the East of London. He did physics, I did English Literature, but we had common friends. We'd played a few times before and it didn't really work because we were both into different kinds of music. Then everyone went away for the Summer... my parents live in France and he just wants to live in London, so it ended up being just us two and we just started playing together. I think as you share something you gradually get closer to what you're trying to get at.
Mike: We found a middle ground... I was always trying to make it heavy, Luke was always trying to make it soft!
Luke: Nobody was giving something up, it wasn't like 'I'll give up this, if we can have this,' it was more like trying to make something together that works with both attributes that we've got. It was a very positive thing. I met Tom in the Camden Head having a drink... as you do! He was playing in a more acoustic band... I gave him my number and told him if he wanted something a bit more punky to give me a ring. About 3 weeks later I got a little text, and we had a little jam. We went a bit quiet for a bit, then got Perry involved. Slightly long winded, but very lucky actually!
Perry: I was asked to join by Mikes' old guitar teacher. I'd just dropped out of uni, and so had a very free schedule. Then this band came up and I thought 'yeah, I'll do that,' and here I am today!

What did you grow up listening to, and do you feel it's influenced you in your own musical endeavours?
Perry: We all listen to a lot of different stuff, and I think that comes through in our music.
Mike: If we all listened to Oasis, we'd sound like Oasis... but we have lots of different influences. I grew up listening to a lot of guitar based things and beyond, but the moment I heard Guns N' Roses... I wanted to play guitar like that.
Luke: We all have very different backgrounds too in terms of where we were brought up and what our parents listened to which has a massive effect on a young person. But we've always shared music a lot... we've got a group chat, so if someone finds something cool we'll tend to share it even if we think it won't be the others' cup of tea, it's interesting music and it's educational to our purposes. The thing that really made me want to make music was Graceland by Paul Simon. I know people have qualms with it, but I think it's genius.
Tom: I think for me it was the Chili Peppers... well Chad Smiths' drumming.
Perry: I think I'd agree with Chili's as well.

In terms of starting out and realising you wanted to persue a career in music, were you self taught with the instruments that you all play?
Perry: I'm self taught. I had like two bass lessons and just didn't get it... it just didn't work.
Mike: I taught myself most of it, and then had a few lessons with the guy who knew Perry... but that usually ended up with us just chatting and jamming, I didn't really learn in a scholarly way.
Luke: I got my guitar when I was like 17, but I'd played French horn before... I did really well actually! I passed Grade 8, I was in orchestras and stuff. That gave me a bit of an insight into how music worked and made me understand it.

You've got an incredibly recognisable sound and image... did you know starting out exactly what kind of band you wanted to become, or do you think that's something that's changed with time and experience?
Tom: It's definitely changed... I think developed is the right word for it!
Luke: We grew as a band as we got to know eachother. We just played music that we enjoyed. Probably about 5 months ago there was a slight click where we understood that we wanted to do something a bit more modern, and we understood how we'd gotten from what we started off doing.
Mike: I think we started out trying to imitate our influences and we slowly started to do our own thing.
Luke: We've got a sound now that's more particular to us, as opposed to just reciprocating stuff that we've heard already.

Are there any new bands/artists that you've come across or played with this year that you've been impressed by?
Mike: Bang Bang Romeo are always good. Jackals Rose used to be but they are no more. Fronteers, Blinders... any band that plays with This Feeling, really. Broken Witt Rebels, The Wholls... there's so many.
Perry: Hello Operator, The Shimmer Band, Hidden Charms... Miracle Glass Company who we saw in Glasgow, they were amazing.
Luke: I like Cupids.

You've had an incredibly busy festival season... has there been one in particular that's been your favourite? If so, why?
Tom: Isle Of Wight festival, I think.
Luke: That was our first actual big festival together so we decided to not take anyone and just the four of us go... it was quite a special experience. The organisation and everything was so smooth, and it was nice weather! 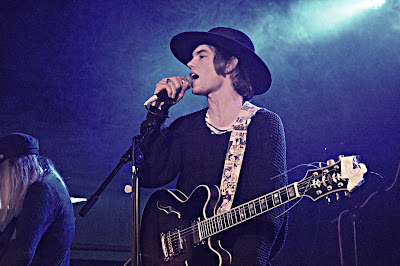 What other hobbies and interests do you all have outside of music?
Perry: I quite like fishing.
Tom: I snowboard.
Mike: I like motorsports, car racing and stuff like that.
Luke: I like going for long walks... and little walks! But I write songs while I'm walking!

Is there anything that you've done so far- whether that's a particular piece of music, a certain show you've played or perhaps something else entirely- that you're especially proud of?
Luke: I'm dead proud of the new songs that I've written and that we're playing at the moment. I'm really happy because I think they're getting to a higher level. I think people tend to think someones either a good songwriter or they're not, but I can really tell that over the last two or three years that the songs are getting better and I can tell that we're interpreting them better as a band. So I'm dead proud of that and of the performances that we're giving, because we're working hard and we're playing better. We're practising a lot and you can tell... and that really makes you proud.
Mike: I'm quite happy that we've got as far as we have without any kind of external help, like management, agents and stuff like that. Most of the bands we play with have a decent manager or agent but we somehow do it all ourselves and wing it!
Luke: I don't think we wing it... we work hard. We've turned stuff down, because it wasn't our thing. We can do what we're doing by ourselves... it takes a lot of work but at least we've got full control of the situation It does take a lot... organising gigs and making it cost effective. It's hard, but if you want to do your own thing and make it exactly how you want it, then you have to do that.

What would you say has been the biggest learning curve for you as a band since starting out?
Luke: I think the main learning curve is just being nice to people and enjoying it. Sometimes you think you haven't played a good set and you're a bit grumpy... so it's about learning that you've still played a set, you probably didn't do that badly, and just to have a good night! Next month we're supporting Starsailor and that's going to be a big learning curve because they'll be the biggest gigs we've ever played.

Is the songwriting process a collaborative effort or is there a primary songwriter?
Mike: Luke would be the primary songwriter.
Luke: I'll write the songs and then I'll take them to the band and share them and they'll come in with ideas. When it's written acoustically, it's not really the song because it's a band thing... they bring in their expertise and prowess! We'll jam it out... sometimes I'll have an idea for a hook, sometimes Mike will have an idea for what I should do guitar wise, because he's a better guitarist than me... sometimes! No, no... he's better than me. So that's how it works!

Finally, I know you have an EP coming in 2017... what can you tell us about that at the moment?
Luke: We've just got some mixes back.
Mike: It sounds really good, it's a lot more fresh than what we have at the moment.
Perry: I'm excited for people to hear it. We've got this EP's worth of songs to come out, and there's already another lot ready to come.
Luke: There's already another 2 EP's written, basically. There's particular themes that bind the songs together. I won't say what they are! Each song is easy enough to interpret on it's own but there is a theme that brings them all together, which is a good thing because it makes it more of a full project as opposed to just whacking four songs out and putting them on an EP.
Mike: It's coming in February. It's actually coming out through This Feeling.

Check out the music video for 'Take Me While I'm Here':
Posted by Fiction Is Not Imagination at 07:40