There's a real buzz surrounding Grimsby four-piece Mint (Zak Rashid, Adam Shaw, Sam Chapman & Andy Maidens) at the moment. Their monumental debut EP 'Happiness Is Heroin' has clocked up over 20,000 listens on music streaming giant Spotify, which resulted in single release 'Elise' making the UK Viral 50 chart at an amazing number 11. And Spotify aren't the only ones showering this band with attention... they're receiving radio airplay left right and centre, including from BBC Introducing. All of this success is well deserved; Mint are the epitome of the perfect guitar band, with a brilliant work ethic, heaps of talent and an endearing likeability about them to boot.

I was able to chat with three quarters of the band following their incredible set at Oxjam Festival in Leeds a couple of weeks ago. (you can read my review of that here) They're every inch as charming and fun as I'd perceived they would be. 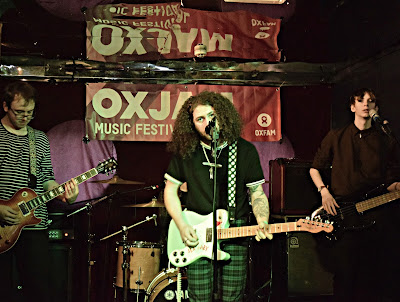 How and when did you first come together as a band? I want to know the story behind Mint...
Zak: It was just dead easy, we met at college... all three of us were in different years. We just got talking and decided to start a band. Love at first sight!

Starting out, did you know exactly what kind of sound and image you wanted the band to have or was that something that developed over time and with experience?
Zak: We still don't! I think we spent maybe four or five months of the period that we've been together just worrying that we're too much like this, or too much like that... and I think after a while we kind of just thought just fuck it, lets just do what we think is cool at the time. If you're interested in change, you do develop and stuff... what we were like four months or so ago is totally different to what we're like and how we think now.

What did you grow up listening to and do you feel it's influenced you in your own musical endeavours?
Zak: Freddie Mercury was one of my first guys! Him and the fella from AC/DC... Bon Scott? My taste in music growing up though... I didn't really have any standards, I just listened to anything and everything. I think because I'm the songwriter, with me if it's a good song, it's a good song.
Sam: I grew up listening to Coldplay. I never really had any influences.
Andy: I was proper into trashy rock like Nirvana... stuff like that. I'm still into it now.
Zak: I don't think you ever really disown any bands, I don't think you ever go 'oh, I don't like that anymore,' you just sort of wear it out, I think. There's some tracks I wouldn't have on my iPod but I think if it came on in a kebab shop, even if it was from the early days and I'd liked that song at one point I'd still be like 'I love this song!'

You're just setting out on tour... is there anywhere that you've had great experiences in the past and so are particularly excited to play?
Zak: LEEDS! Maybe Nottingham because it's in a record shop. Free accomodation too because my sister lives there! She doesn't know I'm staying yet! I think we've surprised ourselves with the fans and stuff, just on social media... like when we announced it and people were tagging their friends about coming to the gigs, it's great. I mean, I struggle to get my mum to listen to it, nevermind people in Corby! All of the venues are quite intimate, so I'm really looking forward to meeting and speaking to people.

How do you fill your time between shows when you're on tour?
Zak: Eat and fall over. What about you, Andy?
Andy: Just eat and not fall over...
Sam: We do our own thing and just chill out.
Zak: I listened to an interview that Catfish did and they said that they've been around the world but seen nothing because they just sit, smoke and do nothing... I think we're the absolute opposite of that. We love seeing stuff, going places and eating new foods! Except from Sam... egg and chips every day! But yeah, I think we're quite driven to do stuff. The thing is with touring, I think maybe 60% of it is playing and the other 40% is for your enjoyment.

The EP is absolutely brilliant... there's not a bad track on it, and it seems to be going down really well with everyone, fans and media outlets alike. What was the process of bringing that to fruition like and how does it feel to finally have it out there?
Zak: Yeah, I'd say it's been a long process. I think we're quite quick in the rehearsal room with writing songs. The thing is, we don't jam or anything... I'll say I've written a song, bring out some ideas and play it to the guys acoustically. We all sort of click and we'll all take it apart and build it together... it'll take us maybe two three hour rehearsals and then we've got a new song. I think because we wrote all of the songs on the EP so far apart, it's like a nice capture of the story. 'Wolves' was when we first started out, it's quite raw and punky. 'Living & Dying For' is just a pop song. I feel like 'Elise' and 'Wonderland' are the two that really show who we are.

I think it's really great when bands go out of their way to support other bands. As I've discussed with Zak before, I've seen you guys around a few times over the course of the Summer at various festivals watching and chatting to other bands. Are there any up and coming bands that you've seen that have really stuck out to you?
Zak: We've got a lot of bands that we're friends with, and it all starts for me just being an absolute fangirl! When we met Judas for the very first time, I'm pretty sure I ran up to John Clancy and was like 'YOU'RE JOHN CLANCY FROM JUDAS, OH MY GOD!' and he was like 'Yeah, you're Zak from Mint.' I was melting! We ended up being mates with them and now we're on a first name basis! Hertford on tour... we've invited Judas along as support so that'll be a really good show. When we played Party In The Pines we got there just after their set and was gutted. We had a couple of technical faults in our set... it was like everything sort of went wrong but partying with Judas proper sorted us out. You meet a lot of bands that just want to play the game and end up with a bit of 'who's better than who.' We're not really about that. We're not a band that likes to brag so it's just nice to meet other bands that don't just talk about music and we can talk about other stuff.

What's been the biggest learning curve for you as a band since you started out?
Andy: I guess learning to like other music, because I started out really narrow minded. I just listened to trashy rock, stuff like that, and now I'm listening to lots of indie-pop and things. I never would have pictured myself liking half the stuff I do now.
Zak: Other than boring music stuff, taking better care of your money. I can remember the first tour we ever did for Living & Dying For, by like the fifth day we were around a table in Northampton sharing a sausage roll. We were like five days in or something, and all out of money scrounging off this sausage roll and freezing cold! So take better care of your money, because it's expensive!

Finally... what's next for Mint?
Zak: I think the main thing is that we'll just be pushing the EP and stuff. We got onto 'The Indie List' on Spotify which was cool. So it'll just be the tour, and then Christmas! We've got a couple of things in the pipeline but we can't really say.

I'm left in no doubt that Mint are four artists with a determined, industrious love for music and performing, who most definitely look set to become the UK's next big breakthrough band. Watch this space.
Posted by Fiction Is Not Imagination at 09:41