I've always been a sucker for some killer female vocals, a'la Wolf Alice, Black Honey, INHEAVEN... but there's something seriously special about Scarlet. In their leading lady, Jessie Robinson, the band have an incredibly talented and endearing figure of female solidarity and fortitude within the music industry. Often with albums, no matter how much I love the band, it takes me one or two listens to really 'get' it, but I can safely say that my love for 'Effigy' was instantaneous. From start to finish, it's nothing short of stunning. I saw them live a few months ago when they played in Doncaster as part of Blackfest; they gave a captivating, awe inspiring performance, and the unwavering chemistry between them as a band was immediately obvious. It's those undoubtedly strong friendships that have built the foundations for this incredible debut release. 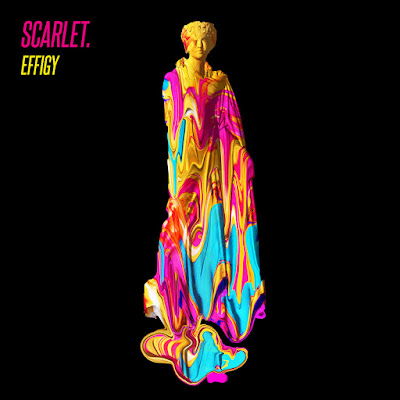 There's a real variety in sound throughout the album; I think it would be impossible to assign them to any one genre. There's the upbeat, vivacious and confident 'Your Control' at one end of the spectrum, and then the hauntingly beautiful, raw and honest 'Hold Me Under' at the other. There are guitar fuelled numbers such as 'Heavy' and my personal favourite 'Alone' which show their apt ability and huge potential as a rock act... but then tracks such as 'Nothing' and 'Heart On The Line' are perhaps a little more pop orientated. However, what brings each and every track together is the obvious strength and meaning behind them all; the lyrics show the journey that Jessie was on when she wrote these songs, and as she herself pointed out, this is the culmination to an incredibly difficult period in her life. Like a phoenix from the ashes, Scarlet have taken and created something astonishingly beautiful from trying and traumatic experiences in their lives that most people would do their best to block out completely.


Listen to and purchase 'Effigy' here!
Posted by Fiction Is Not Imagination at 08:24