There are a couple of big reasons why I always really enjoy events put on by 360 Club. First of all... location, location, location! The Lending Room at The Library is an absolutely brilliant little venue, located in the very heart of Leeds. You can always count on it to provide a really great atmosphere, and as an added bonus I've found that the lighting is just perfect for anyone with a passion for live music photography. Secondly, and most importantly, the line up is always completely and utterly brilliant. Organiser Richard Watson has a real eye for up and coming musical talent, and brings in acts from all across the country to play for him. I honestly don't think I've been to a single one of his shows' that hasn't been packed to the rafters. In part, this is perhaps due to the fact that set times and running order of bands are not released prior to the gig, so to encourage people to come down and support all of the bands, not just the one act they may have come for in the first place- which I think is a great way of doing things, and definitely works well. I'd been looking forward to this particular show for a long time. Suffice to say, it did not disappoint, and definitely goes down as one of the musical highlights of my year so far. 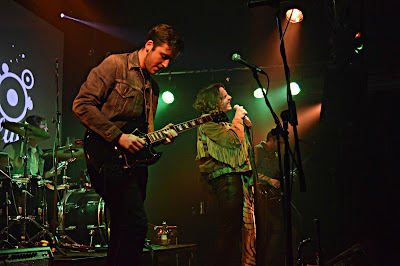 The Doldrums kicked off proceedings with their usual blend of anthemic, edgy rock- but there was something noticeably different about them this time round; from the offset, I noticed a real change in their technique. Everything was done with real precision, resulting in an exceedingly polished and professional performance. Even the older tracks that I've become so familiar with sounded somewhat different this time round; everything was just that little bit bigger. In the year or two since I first came across this band, I've been able to witness first hand how much they've grown, and their new music is a clear and impressive display of the direction they're headed in musically. With a new EP in the works, I reckon they're destined for big things in 2017.

Next up were Edgar Duke, who as always gave a light-hearted and energetic performance where in none of them were still for barely a moment and everything was incredibly fast paced. But that's what I love most about them; they're an exciting young band who are clearly in their element when performing live. With their live set, they show that they're not only the masters of indie-pop, anthemic numbers that you can have a dance to but are also capable of slowing it down a little with tracks such as the seriously beautiful "That Day In May"... it's that versatility that makes them so interesting. I could tell that the band were getting a real buzz out of playing to a hometown crowd, and this was definitely the strongest performance I've seen them give so far.

The Potenzas, being the third band of the night, managed to draw in a substantial crowd- many of whom were singing and dancing along throughout the entirety of the performance, which was great to see. They performed with great ease and confidence, and I was instantly impressed by their big rock sound, which reminded me somewhat of early Arctic Monkeys. Instrumentally, they didn't put a foot wrong, and everything was perfectly executed.

Hailing from Liverpool, headliners Cabezudos were the only out of town band on the line up. I'd been asked by bassist Tom prior to this gig if I'd review their set, which I'd gladly agreed to, but not having listened to their music beforehand I wasn't sure what to expect; when asked to review a new band live, I quite like the element of surprise, and so often choose not to listen to their music so that everything is completely new when seeing them perform. I can safely say that NEVER, in all of the years I've been attending gigs, have I EVER come across a band who have captivated me so quickly and completely as Cabezudos did. Within seconds of them taking to the stage, I was in awe. Frontman Jack Hughes is a huge character, with phenomenal stage presence and one of the most brilliant and powerful voices I've ever heard. This wasn't just any ordinary performance, it was a real show; I believe that the level of showmanship displayed by this band isn't something you can acquire with time and experience... that attitude and theatricality is something that you either have or you don't, and I think it's safe to say that these guys definitely have it.


Get to know Cabezudos for yourself...

I just couldn't let this band go back to Liverpool without having a chat with them first, and discovering what they're all about. Keep your eyes peeled...
Posted by Fiction Is Not Imagination at 11:14