Anyone who knows me will confirm that I am the least spontaneous person ever. I'm the first to admit that I find interviewing bands completely nerve wracking, and I tend to spend days preparing. But seeing Cabazudos perform on Saturday night at the 360 Club inspired me to not only reach outside my comfort zone... but completely dive out of it. I don't think a band has ever had such an impact on me as these guys did; within seconds of taking to the stage, I knew I'd stumbled across something extraordinarily special, and I also knew that I had to chat with them for the blog so that I could properly introduce the band that completely blew me away and hopefully make you fall in love with them too. 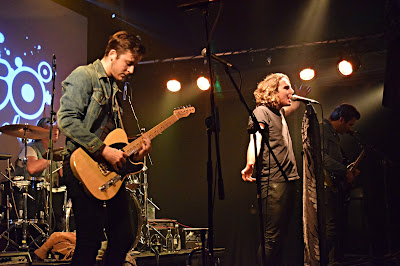 Cabazudos are the Liverpool based extravagant rock quartet made up of frontman Jack Hughes, guitarist Chris Bolton, bassist Tom Maher and drummer Harry Strachan. We were also joined by Sean Fay, who plays trumpet for the band at live shows. To say it was so inpromptu, I really enjoyed this interview; they're all incredibly funny, and to top it all off I've finally found a band who manage to incorporate Harry Potter references into the interview on more than one occasion. Perfect.

You have this really incredible, polished sound... how long have you actually been together?
Jack: Just over a year. We haven't actually gigged in four months!

Did you know eachother before you formed the band?
Jack: He's (pointing to Chris) been my best friend since we were about three.
Chris: Yeah, he lives five doors away from me.
Jack: No, you live five doors down from me- I think that sounds better!
Chris: We know Tom through a girl. He was in a relationship with some girl that we were mates with.
Jack: Can't be named! It's like Voldemort.
Chris: And he used to hate us.
Tom: I did used to hate them! I still do a little bit, but we've got past it.
Jack: And then we fell in love!
Chris: And then we searched the high webs of the internet for a drummer, there's literally a site called joinmyband.co.uk and I searched through about 20 pages. I messaged all of them and he was one of two that got back to us.
Tom: He's very good, and we can't complain.

There's a real element of showmanship to your performance- I think that's something that you either have or you don't, it can't be learned, and you definitely have it. You very much have your own style- is that something you've developed over time or did you know starting out the kind of band that you wanted to be?
Tom: This is the first gig with the new style! We were a bit lighter before.
Chris: I think we went back to our roots. At core, we're a heavy blues band. If you can manage to catch us, we're playing in Bradford next month.
Jack: It's just good to be back to be honest, and to stop not being a gigging band and just being locked away trying to write new songs.
Tom: We are better for being locked away. We've practised and practised and made the set tighter, and had a break which we needed.
Jack: The hardest thing is, you can write your setlist out and you can go and you can play these shows... you'll be playing a song and you'll think we've got that one next, maybe it's not time for this one yet... maybe people aren't jumping around enough or enjoying themselves enough to it yet, so you've kind of got to play it by ear when picking out what you're gonna play.

So do you think in those four months that you've been away, you've grown quite a lot as a band?
Tom: We're tighter, we're closer and we've been spending time together... it's starting to pay off.
Chris: I think we're more mates now, I think that's a big thing! But me and Jack... we're 20 and we've known eachother since we were 5.
Jack: 3! You came round to watch Batman with me at ours and robbed my machine gun. To this day, he still says he never robbed it. He's still got the machine gun under his bed. But yeah, I think the locking ourselves away bit has been beneficial. We didn't see it like that at the time, we wanted to carry on gigging... but to come away from it with fresh ideas and to bounce back has been great.
Tom: Now for this tour, we're better and we're gonna be tighter. 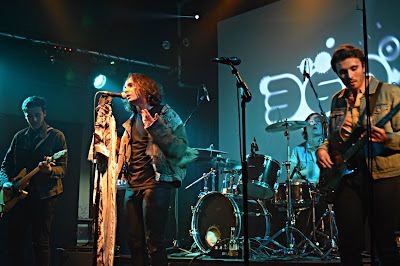 What did you grow up listening to and do you think it's influenced your own musical direction?
Jack: Robbie Williams, Michael Jackson...
Chris: What we listen to now is nothing like what we did listen to. I used to listen to Eminem and all that shit.
Tom: My first gig was Westlife, 'World Of Our Own' tour.
Jack: We've come a long, long way together... through the hard times and the good...
Chris: I've been to see Tinchy Stryder twice. Twice!
Jack: Tinchy if you're listening.... west side.

Tonight was my first experience seeing you live, but have you gigged in Yorkshire much before?
Tom: This was the third time.
Jack: We've played in Bradford before.
Chris: The free entry gigs... you can go round and get people in, it's better than the paid gigs actually.
Tom: Me and Jack went to every pub we could find in Bradford, and we got like 50 or 60 people to come which was great.
Jack: He chatted up every old man and his cat!

What's the music scene like back home in Liverpool?
Jack: I think it's better here.
Tom: There are some good bands, but terrible promoters.
Chris: It's dominated by promoters who want money, so there's a lot of good bands but no one can get anywhere.
Jack: We absolutely adore Richard here at 360 Club, he sort of sits you down, slaps you in the face... and he's got a cracking beard. But he's someone who you want to play for, you want to sell tickets for him. Back home it is a lot more money orientated, but there are some good bands. The scene died for a while but it's strong as ever at the moment.

What are you working on at the moment, and what are your plans for 2017?
Tom: Bigger and better.
Harry: That's the name of our new EP, bigger and better... apparently that's what we're working on.
Jack: That's what we tell people anyway. For 2017 we want more people to be able to pronounce our name.
Tom: We've had Cabe-Zudos, Quasimodo... anything you can think of, we've had it.
Jack: I think it takes two go's to be able to say 'Oh, I remember it now,' and then you'll probably forget ten minutes later. When we have to and when things get a lot better, we'll look at changing it. We want to keep this name for now and keep trying to conquer as much as we can.
Chris: Then when we're ready, we'll change it. What you've got to understand is if you're in Liverpool and you try to tell any scousers your band name they don't have any idea what to say.
Jack: 'I went to see that Wingardium Leviosas'. This was an issue we never thought we'd hit.
Tom: Cabezudos is Spanish for 'big heads'. There's a festival and they have these big, paper mache heads.
Jack: It's more that we've all got fat heads, to be honest! 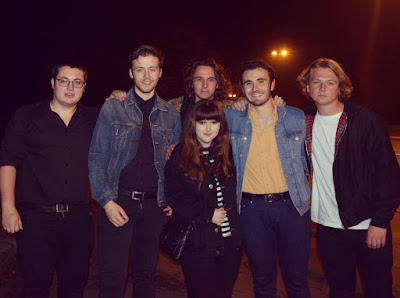 Catch Cabezudos live...
They play The Buyers Club in Liverpool on November 5th and The Underground in Bradford on November 12th.
Posted by Fiction Is Not Imagination at 11:37