Oxjam Leeds Takeover is the inner city music festival with a difference, and its back in 2016 for its tenth year. It's all in aid of international charity Oxfam, and thus will help in the fight against poverty and social inequality. The festival will take place on Saturday 22nd October across various venues in Leeds city centre, including Milo Bar, The Old Red Bus Station, Santiago Bar, North Brewing Co, and more! It will act not only as an opportunity to raise much needed funds for a truly important cause, but also will proudly showcase some of the countrys' brightest and most promising musical talents. The line up features some absolutely brilliant bands and artists from far and wide, and I've chosen my top three acts whom I'm particularly looking forward to seeing on the big day. 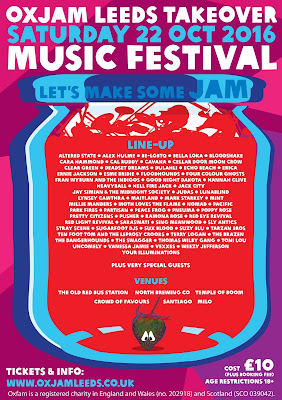 Floodhounds Playing at: The Old Red Bus Station at: 4:15pm
This three-piece Sheffield band have a big sound and even bigger stage presence, which I myself can confirm after having seen them live a couple of times now. They bring something a little different to the indie-rock genre, with their raw, youthful energy and obvious passion for what they do. They've just released a brand new EP "Look What You've Started", a utterly brilliant listen which is proof in itself that Floodhounds are set to bring the noise at Oxjam.

Judas
Playing at: North Brewing Co. Stage 1 at: 7:45pm
Judas are the name on everyones' lips at the moment. August saw them conquer the main stage at Leeds Festival, which went down extremely well with the crowds there despite the fact they were a bit of a last minute addition to the bill... so they're sure to draw in huge crowds when they play Oxjam Festival. Radio and television outlets can't get enough of them, and neither can I; they're a band with real charm, charisma and vigour, and their huge rock sound has seen them go from strength to strength in recent months. Theirs will be a performance where, in years to come, you'll be proud to be able to say you were there- so make sure you don't miss it; Judas are the next big thing.

Mint
Playing at: Milo Bar at: 7pm
There has been a lot of hype surrounding Mint throughout festival season, and as soon as I listened to their recently released debut EP "Happiness Is Heroin", I immediately realised why; they're exciting, fresh and lots of fun... but most importantly they know how to produce the most wonderfully catchy, infectious pop-rock tunes that make you want to sing and dance your heart out, and this is exactly why they're the act I'm most looking forward to seeing on the day.


Tickets are just £10 plus a small booking fee, and can be purchased at http://oxjamleeds.co.uk/festival-tickets/. Grab one while you can and come enjoy some quality live music in one of the countrys' biggest musical hubs, all the while knowing that you're doing your bit to help an incredible charity in the process. One thing's for sure, it's going to be a day to remember.
Posted by Fiction Is Not Imagination at 10:10