I have no doubt in my mind that The Jackobins have what it takes to become the next big thing. The band is made up of Dominic Bassnett, Veso Mihaylov, Andy Pink, John Whittingham, Chris Marriott and Marc Terry. 2016 has seen the release of an incredibly successful new single in the form of 'Hasty', as well as relentless touring up and down the country and numerous festival appearances, all of which have undoubtedly earned them a legion of brand new fans- and rightfully so; frontman Dominic, with his powerhouse vocals and endearing stage presence, is one of the most compelling performers I've ever come across and as a whole the bands chemistry and charisma is undeniable. If you haven't seen them live yet, then I urge you to do so whilst they're still frequenting the smaller, more intimate venues across the country because one thing's for sure... it's only a matter of time before these guys are catapulted into the limelight. 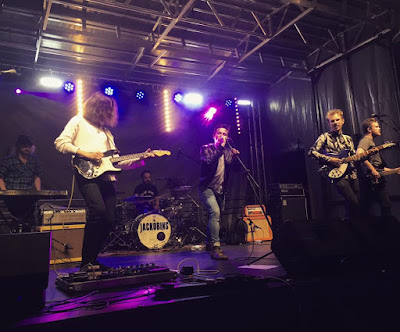 Admittedly, interviewing bands is one of the most nerve wracking parts of running a music blog and I always find myself feeling a little bit nervous both beforehand and throughout- but I don't think I've ever felt quite so comfortable and at ease as I did when chatting with Dom and Veso after their impressive set at Askern Music Festival a couple of weeks ago. The bond between them was immediately evident and by the time I reached my last question, I felt like I was simply chatting with friends rather than conducting an interview!

What did you grow up listening to and how do you feel it's influenced you?
Veso: It varies because I listen to a lot; from classical, to psychadelic, jazz, blues... but some of my main influences were The Doors, The Verve, The Stone Roses, The Libertines... Led Zeppelin, Kasabian... that's about it really.
Dom: You've got quite an eclectic music taste haven't you! One of the first CD's I ever bought was 'Hopes and Fears' by Keane. The Killers... so that sort of thing, sort of like rock but mainstream rock I suppose you'd call it. I like a big sound, I love U2. I can't say I was brought up on them, I discovered them later on. I've always liked that punky side as well, like The Sex Pistols, The Clash... that sort of thing. Obviously there's a tiny bit of Queen influence as well! I do love that really sort of ballsy guitar rock. In modern music I do miss that theatricality from frontmen.
Veso: I think I miss the attitude more than anything. Bands with attitudes and with something to say, it's starting to get really washed out. You watch a lot of bands and it just doesn't feel like it's real, it doesn't feel like it's out there and they mean what they say.
Dom: I like to watch a band and even if they're not that good, if they've got a bit of spunk about them, I'll like it. You can get better at music but you can't grow that attitude.

Speaking of early memories of music - what was the first gig you ever went to?
Veso: Can we do the first gig that we went to together? That's gonna be really cute. The Libertines. It was the secret show they did before the start of the big tour.
Dom: We do love The Libs- they're like mine and Veso's band. I had to pull Veso out of the moshpit. They were moshing out to The Smiths- how can you mosh out to The Smiths?! This was before the gig even started. We nearly had a fight because everyone was punching Veso. They didn't punch me because they couldn't see me because I'm so small, but I was like 'Nah I'm not having this, you're not touching my boy,' so I had to pull him out.

You seem to have quite a substancial fanbase here in Yorkshire; what has been your most memorable experience of gigging here to date?
Dom: We gig here more than we do in the North West. Before I was in this band I never even came to Yorkshire and now it's like a second home. Mosborough was a really nice music festival, we got to hang out with Space.
Veso: Live At Leeds was really good. Obviously playing Leeds Festival was a highlight but in all honesty it wasn't the best gig we've ever had- it was fantastic and a real honour but I like the tiny venues where you can feel the crowd bouncing and getting energised. Oporto was great, with Double Denim Live. We're really looking forward to Kazoopa Festival with them in November, we're playing Verve Bar.

Are there any other places you're especially looking forward to playing this tour?
Veso: We've got a homecoming gig, which is the relaunch there for This Feeling which is quite an honour in itself because we love Mikey Jonns, and we love This Feeling. We love the whole team and what they do. They really support up and coming bands and actually give them a chance. I don't think there is anyone else in the country at the moment who does that, has that amount of networking and can give you the opportunity to play so many cities and festivals. The guy is championing new music more than the BBC by a mile.
Dom: What he's doing for guitar bands... I haven't come across anyone else who's doing that. If there's going to be a resurgent in guitar bands, then it'll come from This Feeling. It's like a little family as well. I remember leaving a Leeds gig and the stage manager told us we're part of the This Feeling family now. That's what you want in the music industry, there's too much back biting, fighting and competition. It's NOT a competition. Why be negative, when you can be positive?
Veso: They're into Cabbage at the moment, and The Shimmer Band.
Dom: Cabbage are really nice lads as well, they're mental which is brilliant!
Veso: They've shown us massive support as well as bands like The Barmines and Judas, who are fantastic.
Dom: They take a good band, they get them together and they give them a stage.
Veso: Mikey did push Catfish & The Bottlemen quite a bit so he can definitely show you the bands that do actually get out there.

There's six of you in the band- so quite a lot of people! In terms of the songwriting process, do you all work on it together and bounce ideas off one another or is there one of you in particular who is the primary songwriter?
Dom: I'd say Veso is the chief songwriter. He usually brings the bones of a song, and then everyone else fleshes it out.
Veso: Not to take anything away from the boys though because a lot of the time I'll bring the seed and they will make it grow into a flower. I think we found that piece of magic where in it might change completely by the end of the song - nothing to do with the initial idea - but we've made something good and we just start to bounce ideas off each other. Sometimes it might be a frustrating process, sometimes it happens in minutes.
Dom: 'Ghost' was written in about 20 minutes! But then other times it takes us months to write a single song. It is a collaborative effort.

How did you first come together as a band? Were you all friends beforehand or did music bring you together?
Veso: The story according to Dom is that I stopped him outside of this pub where he was singing and fell in love with his amazing voice. Part of it IS true, I did hear him singing and asked him to be in a band with me. He was about to give up on music and I was like 'NO! You are not giving up on music, you're in a band with me,' I asked him what he wanted to achieve and I promised him 'You're gonna be playing sold out shows within the year, you're gonna be on national radio within two years and we're gonna be playing Leeds, Reading, Y Not' ... stuff like that... and I've actually delivered which is ridiculous because we're self managed, but I think part of it is because we do have that bond.
Dom: He was messaging me on some band forum asking if I wanted to make a band. I didn't know he'd seen me singing so I was like 'Who the fuck is this crazy foreign guy?' The way he was typing was mental, he was like 'Do you want to meet me or not?' Then he stood me up in a pub and I ended up joining another band because they were there at the time. Then the pub exploded- true story- we weren't in it at the time, but it was a good pub and it exploded. I eventually invited him to a Halloween fancy dress party...
Veso: I didn't know anyone. John (who plays keyboard in the band) turned up a couple of hours later and I hadn't even told Dom he was coming so he just turned and was like 'I'm John'.
Dom: He didn't even say that! Typical John style, he came to my flat, knocked on the door and went 'Alright,' then just walked in. At the time he was the bassist.

You always seem to be touring, but music aside what do you do outside of the band?
Veso: We're a bunch of nerds, we like to play strategy games together- me and him. And we've got bunnies. We love the bunnies.
Dom: He's moved out though so I've got custody of the bunnies. They've started burrowing out of grief.
Veso: Yeah, they want to run away and come to me!

'Hasty' received such amazing feedback- and rightfully so, it's a brilliant track. But what's next?
Veso: We are planning a tour for January and February, we've got a few special gigs coming up, and we've got a new single. We've just finished recording it. It's getting mastered so should be back in a few weeks. In my personal opinion, it's a step up from 'Hasty'. 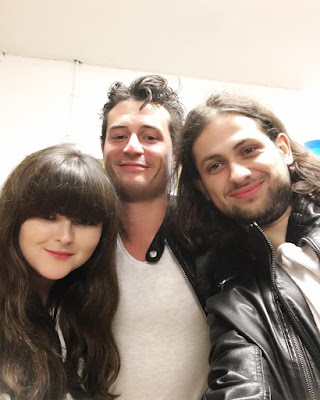 Posted by Fiction Is Not Imagination at 13:11