I've seen INHEAVEN three times now, and all three gigs have been at my favourite venue, the Brudenell Social Club in Leeds... so it only seemed fitting that my interview with the band should take place there too. The London based quartet have been making serious waves on the live music circuit for quite some time now, gathering up momentum by supporting some big names throughout the course of the year- including Sundara Karma and Yak, and they're just about to embark on tour with Blossoms.

The band is made up of lead vocalist & rhythm guitarist James Taylor, bassist Chloe Little, lead guitarist Jake Lucas & drummer Joe Lazarus. Their first headline tour is going extremely well; they've drawn in huge crowds in every city they've played so far, and rightfully so. This is a band who not only have their own incredible and unique musical style, but they have a really great work ethic too. They've gotten to where they are now through touring relentlessly in order to build up their fanbase, and are all incredibly kind people- which I experienced first hand when James saw me eyeing up a poster on the walls of the Brudenell after their the show, and immediately tore it down and gave it to me. One thing is for sure, they're going to go far in the industry, and I was honoured to be able to speak with Chloe before their Leeds gig. 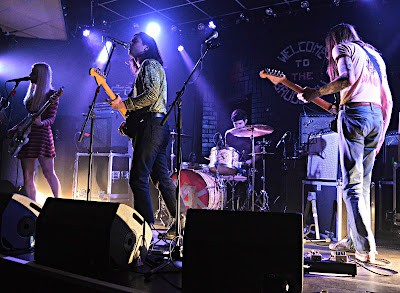 The headline tour seems to be going extremely well- what have been your highlights so far?
All the gigs have been great, it’s been amazing going to all these places we’ve never visited and for people to show up. It’s so nice to see people enjoying our music.

Are there particular places that you always look forward to playing when you tour?
Birmingham, Leeds and Newcastle.

You've toured with some seriously amazing bands in the past- Sundara Karma, Vant, Yak to name but a few- did you learn anything from them, and what was that experience like?
Absolutely. Each support tour we’ve been on we have taken away something different. From watching Yak every night we became a much better live band - those guys are incredible.

When I last saw you it was right here at the Brudenell. It's definitely one of, if not THE, best venues in Yorkshire and is living proof of the importance of independant music venues to up and coming bands + music fans alike. The closure of small music venues seems to be very much in the media spotlight at the moment, and it's definitely something that needs to be addressed, isn't it?
Yes it’s very sad, there are not many small venues - especially in London where we are based that you can get booked to play anymore. Yes, there are still all the big ones, but the small capacity independent ones where you used to be able to cut your teeth are almost all gone. There’s a lot of media focus on nightclubs such as Fabric in London shutting down - but really they should be looking into at all the live venues that are closing.

You obviously have a LOT of creativity and a real dedication to your art; all of your music videos are self made, & you've been quite vocal in the past about how important it is to you not only to write and produce great music but also to pay just as much attention to the visual aspect of things as well. Do you think being able to have that DIY approach to your work has helped you grow as artists and discover your identity as a band?
We love being involved in every aspect of this band - it comes naturally to us and we never even thought about getting someone else to make our videos or our artwork. Everything we do is an extension of our songs and we hope that comes across to the people who listen to our music and come to our gigs. 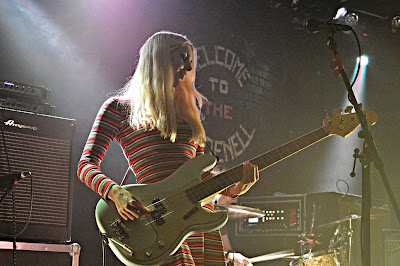 You've had a very busy festival season and have appeared at some of the countrys' most high profile festivals over the course of the Summer. Did you manage to catch any bands between your own performances?
We saw so many bands this summer, it was great- Black Honey, Fat White Family, Blaenavon, Baby Strange, NGod, TDCC to name a few…

You've come out with a number of equally brilliant singles releases and had great success with them but are there any solid plans for a debut album yet?
We will be releasing our album within the first 6 months of next year…

Can you remember what the first album you ever bought was?
My first album was the Mr Blobby album but I don’t really think that counts as music! My second was Billie Piper ‘Honey To The B’.

You have quite a big online presence, and interact with fans a lot via social media which is great to see. How important do you think social media is in this day and age to up and coming bands trying to make it in the music industry?
You can’t actually be in a band anymore and not use social media (unless you are Parquet Courts) so we try and use it as a positive tool to speak to our fans and we always do our best to answer everyone and chat when we can. If someone has taken the time to invest in your band, to listen to your songs, and send you a message - the least you can do is reply on social media. We will never take the support we have for granted.

What do you all like to do outside of the band? Any quirky hobbies or interests?
We all like quite arty things, movies, going to art exhibitions, photography.

And finally, do you have any concrete plans for 2017 yet or are you just taking every day as it comes?
I think so. I know we will be touring again and working towards getting our record out so that’s pretty exciting! 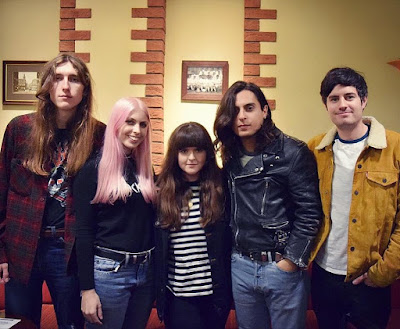 Posted by Fiction Is Not Imagination at 10:21