I was on a complete high after having watched JUDAS completetly smash their unexpected set on the main stage, and ready for some more fantastic live music I of course headed straight back to the Jack Rocks/This Feeling stage where I arrived just in time to see Glasgow four piece Medicine Men deliver a shimmering performance packed full of melodic, punchy and thoroughly enjoyable psychadelic-rock tunes. 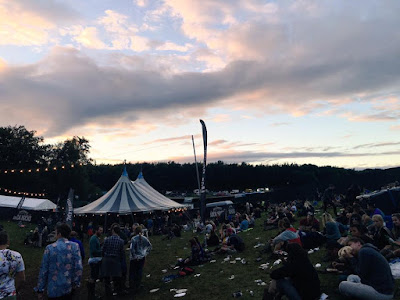 Next came Paves, who ended up being my favourite discovery of the day. Their bluesy-rock sound coupled with frontman Luke Shield's deliciously gritty vocals had me completetly hooked from the first note. It's hard to describe, but there's definitely something somewhat intriguing about this band. From their style, both in terms of how they dress and also musically, they're very different; they have such an effortlessly commanding and dynamic stage presence that it's hard to look away. 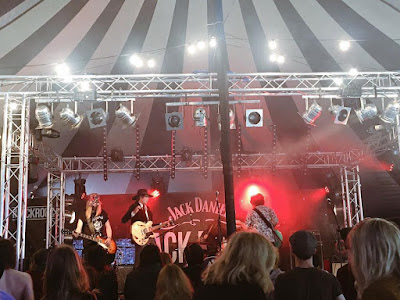 I'd been looking forward to White Room all day. Since seeing them for the first time a couple of months ago I've been completely addicted. Every song I could lay my hands on, I've had on repeat, and so I was very excited at the prospect of seeing them live again for this- my third time. From start to finish, it's an exultant and passionate display and by now everything that I've come to expect from their live performances. Energetic from the word go, frontman Jake thrashes about the stage with his tambourine, every inch the compelling and entertaining frontman. Sharp guitars, and rip-roaring drums are consistent throughout but I was particularly impressed by the powerful bass lines, not to mention great backing vocals, from Josie McNamara- the most recent addition to the band. It's an all around impressive show and I'm left wondering why the Festival Republic Stage tent wasn't completely packed to the rafters. Their zest for music and performing is obvious, and their talent and potential even more so. 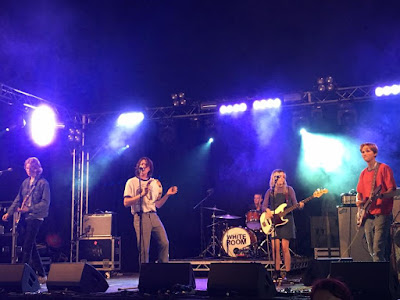 The sun finally came out in the early evening, just as Imagine Dragons came out to play their main stage set. I saw them back in 2014 when they last played Reading and Leeds Festivals, and I remember really enjoying that. I've always really loved their debut album which was packed full of fun and memorable tracks but I must admit I haven't really taken to their latest release 'Smoke And Mirrors'. A couple of songs in and I wasn't really feeling it, plus there was a bit of a buzz in the air about Bang Bang Romeo, who were just about to take to the stage back in the Jack Rocks tent so I headed back there instead. I remember seeing them last year when they supported Blossoms, but I haven't seen them since. I have no words to describe the absolutely jaw droppingly brilliant voice of Anastasia Walker... she's probably the most impressive female vocalist I've EVER heard, and after this performance can now count Peter Crouch and Abbey Clancy among her fans. The atmosphere for their set was absolutely mind-blowing, and it's not difficult to see why everyone was so excited. Musically, they don't put a foot wrong; it's a perfectly crafted, exciting and extremely professional performance- and what's most impressive to see is the clear and strong connection between them as a group. They are perhaps some of the most skilled and captivating performers I've ever come across, and I think every single person in the audience would agree with me there. 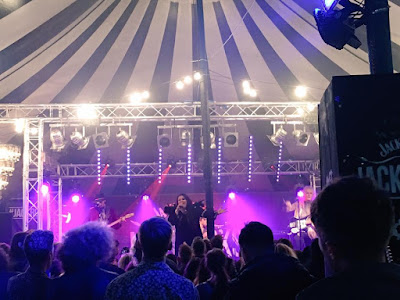 Throughout the day I did a lot of floating about the Leeds Festival site but the majority of my time was spent at the Jack Daniels/This Feeling stage, which provides such a fantastic platform for up and coming bands to showcase their talents at one of the UK's biggest music festivals. The line up was extraordinary. Though it's always great to go to a festival and get the opportunity to see some of the worlds biggest music legends such as Red Hot Chilli Peppers live- personally, nothing excites me more than new music. Bring on next year!
Posted by Fiction Is Not Imagination at 08:48