Despite having spent the majority of my life at one gig or another since I was about 13, until two years ago I'd never actually been to a proper festival before. Basically, I don't like camping and I've always been a bit of a wuss so spending a full weekend roughing it always seemed like something I'd hate. How wrong I was! It was work friends that persuaded me to make my (at the time, reluctant) Leeds Festival debut in 2014 and I kid you not, my life has NOT been the same since. It's become my annual little escape from reality and something I look forward to all year. As I'm sure most of you will agree, being at a music festival is like being in a little bubble for a few days where in the only things you have to worry about are which bands you're seeing that day and where. I love it! This year is the first since 2014 that I've not done the full weekend, and because I'm a bit skint at the moment I didn't actually have any plans to attend at all till I found out last minute that one of my favourite bands JUDAS were set to play. I got myself a day ticket and ended up having one of THE best days of my life. Kudos to anyone who made it through the full weekend, because that mud was off the scale horrendous!

So this year there was a brand new stage at the festival, and one which I'm extremely excited about. This Feeling sure do know how to put on a jolly good show and the line up on the Jack Rocks/This Feeling stage was beyond brilliant and alone would have been worth the cost of a weekend ticket. Over the course of three days, it played host to so many fantastic up and coming bands from all over the country, including The Barmines, Cupids, Hello Operator, Cabbage, The Mexanines... to name but a few. I'm absolutely gutted that I missed Friday and Saturday, but when I attended on the Sunday I spent most of my day at this stage and as well as seeing a few bands that I already knew and loved I discovered a fair few really great new ones too. Bands aside, the reason I spent so much time there was the atmosphere; I saw a lot of familiar faces, and generally everyone was super friendly and relaxed. Plus... for some reason, the area surrounding this tent seemed to be one of the only places on the entire festival site that wasn't a complete mud bath!

I'll be honest, my day got off to a horrible start. The traffic was awful getting into Bramham Park, and then when I eventually DID get in it took the best part of an hour to walk from the car park to the arena due to the mud and by the time I arrived I'd missed Sundara Karma who I'd been really looking forward to. Unfortunately my late arrival also meant that I only managed to catch the last few songs of The Strawberries set, but what I did see was - as always- brilliant and cheered me up after the initial shoddy start to my day. Everything about this band oozes charisma and their music is deliciously addictive and exceedingly charming to boot; music aside (and I'm putting myself at risk of coming across as ever so slightly cheesy here but it simply has to be said) the band have a fantastic image and just LOOK cool. I'm gutted I didn't see more of their performance, but they had a decent sized audience all of whom seemed completely captivated by what they were seeing and hearing.

Shortly after came Manchesters' Dantevilles, who admittedly I'd never heard of before until then. They impressed me a lot, and seemed to get everyone moving which made for a great atmosphere. They have an uplifting and refreshing sound and it's clear to see that this band are all about the infectious and shimmering tunes that get stuck in your head and leave you wanting more. Perfect festival band!

Minutes before JUDAS- the band that inspired me to buy my ticket in the first place- took to the stage for their performance, it was announced that not only would they be playing the Jack Rocks stage... but they'd also been offered a slot on the main stage due to another band having pulled out last minute. Knowing what an exciting and lifechanging opportunity this was for them, I was and still am completely over the moon and VERY proud. So with all of that in mind, there was a real buzz in the tent when they kicked off performance number 1 of the day. They kicked off their set with briliant new song 'Find Someone', before launching into crowd pleasers 'Youth Of The Young Age' and 'Love Is The Enemy'. Everyone was dancing, singing and there was a real glow about the band themselves who were grinning from ear to ear the entire time and so obviously thrilled about the way things were going thus far. 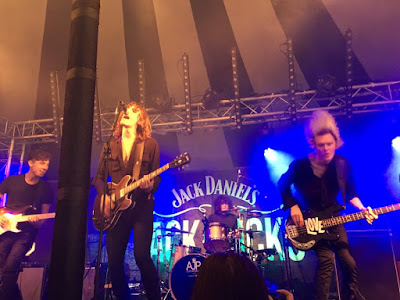 Less than an hour later and I found myself right at the very front of the main stage ready for performance number 2. At this point, I was literally jumping up and down with excitement and in complete disbelief so I can't even begin to imagine how the guys themselves must have felt! When the band were introduced and walked on stage, I felt as if many of the people around me didn't quite know what they thought or felt but it was THE best thing ever to see people starting to get into it as the performance went on and by the end the majority of people around me were dancing. To unexpectedly end up playing to that many people must have been daunting and more than a little bit overwhelming, but if JUDAS were scared then you honestly couldn't tell; they performed as if they'd been frequenting main stages for years. 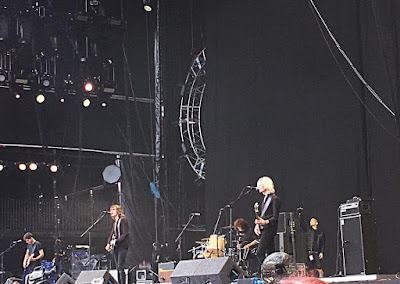 Part 2 of my Leeds Fest write up coming soon...

Posted by Fiction Is Not Imagination at 12:48