Mint are an exciting Grimsby based four piece made up of Zak Rashid (vocals and guitar), Adam Shaw (lead guitar), Andy Maidens (bass) and Sam Chapman (drums). Based on first impressions, both of them as individuals and from seeing them live a few months ago, I immediately perceived them to be fun, confident and... well, for want of a better word, mint. Suffice to say with the release of their EP 'Happiness is Heroin' at the beginning of the month, the band have most definitely lived up to their name! 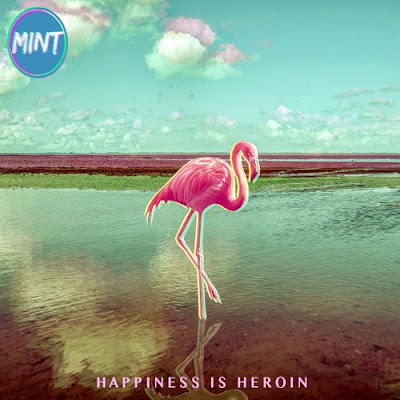 They're very much a guitar band, complete with catchy hooks and swagger aplenty but there's definitely a hint of quirky, high energy pop within their sound as well; this not only makes them stand out from the crowd as they have such a unique and instantly recognisable sound but I reckon it will also make them all the more commercially appealing to radio stations and other media outlets.

Mint have shown themselves to be an industrious and dynamic young band with heaps of potential but for me, they have the likeability factor too which in this day and age is just as important as having the ability to write a good tune. Their music is such that you can listen to it over and over again and never tire of it; opening track 'Elise' is definitely my personal favourite, but overall it's an incredibly strong debut release which really shows how much potential there is for them to become the UK's next big breakthrough band.

'Happiness Is Heroin' is out now and can be purchased on iTunes here. Or alternatively, have a listen here via Soundcloud:

Posted by Fiction Is Not Imagination at 08:50