An Interview with ALISTAIR JAMES

I first saw Middlesbrough based Alistair James live when he supported Miles Kane on the York date of his 2013 UK tour. It was just him and his guitar, and I was instantly impressed by the quality of what I was hearing. Straight-talking lyrics, style and authentic, spirited charm are what makes him stand out from the crowd. 3 years down the line and now playing live with backing band The Insiders, it's been a pleasure to watch him grow as a musician. New release "Just Getting Older" is a rousing, anthemic number filled with roaring guitars, and refresingly honest lyrics that act as the perfect middle finger for anyone who has ever done you wrong. 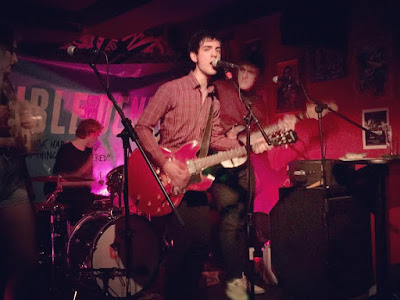 A few weeks ago, I had a chat with Alistair after his gig at Verve Bar in Leeds, where he'd returned once again to play for Double Denim Live. He's outspoken, opinionated and has an unfeigned sense of humour. Plus, he certainly knows how to tell a good story!

Were you passionate about music from a young age? Was it something you always knew you wanted to do?
I've been playing music since I was about 6 years old, I realised it was something I wanted to do when I was about 14 when I started writing songs. It got to a point where playing other people's songs just wasn't enough anymore and then I saw Oasis, familiar to millions and thought I wanna do that and just started to write. The stuff I started writing must have been shit but its something you just keep going with and you get better over time. I remember playing my first gig at school where I played my own material and after that there was no looking back. I just got more confident with it.

You've supported some pretty incredible people- Miles Kane, The Enemy etc- who else would you love the opportunity to play with and why?
Yeah I've been a pretty lucky lad. I'd love to play with Tom Petty, Noel Gallagher, Springsteen, Stereophonics, Keith Richards, Ray Davies, Pete Townshend- the list goes on, we'd be here all day ha! All these people have inspired me one way or another in what I do and to have the opportunity to play with any of them would be amazing just to show them that I am a product of their inspiration. They say you should never meet your heroes, but I think lifes too bloody short- get in there!

You spent some time in New York last year working on music- what was that time like and what did you take from the experience?
It was one of the best experiences of my life. I was working with Mark Plati who had worked with David Bowie in the 90's through to 2003 along with many other artists. He's a top dude, but New York has got to be the best place I've ever been to, its amazing! Just to be there for the first time and making music was mind blowing and playing with people from The E Street Band and well known session guys was another thing, it made me up my game and I think I brought a bit of youth back to them because the sessions were sort of no holds barred, with the drummer we were like "hit that fucking snare!!" but I took from it that you have to be on top of your shit, these people don't mess around and come prepared. Even though I wrote all the songs you've still got to be prepared for people bringing their ideas to the table in the songs.

I know you've worked with Tom Clarke (The Enemy)- what he has done for up and coming bands is amazing. What did he do to help you personally?
Tom is really cool and I enjoyed working with him, he was so into my music. I was an Enemy fan anyway so when he phoned me up out of the blue to say he wanted to meet up and talk I was buzzing. You sort of think its a piss take when it happens but then when he came to Middlesborough to meet with me it was like 'yeah this shit's real!' haha. I ended up going down to Enemy HQ and we worked on my songs, developing them. I gained an insight as to how a person inside the industry works who has been in the same boat as me. I still talk to Tom now and its always good to hear from him. I'm gutted that The Enemy are splitting, we could really do with a band like that now. They had something to say and their songs carried meaning, it's all a bit wet now.

You've been doing this for a long time now- I mean I've known you for 3 years! If you could give yourself one piece of advice when you were first starting out, what would that be?
Just don't worry too much about things or what people think. I don't really worry about much stuff now I'm a bit older and after being through some of the experiences I've been through you toughen up and I do what's true to me. But when I first started, as I'm sure many people do, you worry 'will people like this or will I look daft?' so if I could say anything I would say 'just carry on because you're doing a decent job, don't worry about little things that don't matter and watch out for con artists!'

What/who are you listening to at the moment?
I'm constantly discovering music from the 50's, 60's and 70's. Soul music is never ending and I'm constantly delving. I suppose my most recent listening habits have been The Yardbirds, Ryan Adams, Jefferson Airplane and the new Mudcrutch album.

Describe someone outside of the music industry who inspires you.
Those who are very close to me like loved ones inspire me, my girlfriend is a constant source of support. But everyday life is really inspiring, I love people watching, I could sit in acafe and just stare out the window and make up stories based on the way people look and talk. Previous jobs I've worked in have been a source of inspiration because you get ups and downs that fuel the need to get things of your chest. I try my best to stay switched on when I'm out and about and something will eventually catch my eye or get my attention and I might write about it or just store it in my mind.

When you're rich and famous and someone decides to make a biopic of your life- who would you want to play you and why?
Rich and famous haha, I like it! I reckon that dude off of Coronation Street who has just been killed, erm Callum is his name? He's skinny and has dark hair, he could do it. He'd have to develop a Boro accent first though, but I reckon the lad could hold his own haha.

What is your songwriting process like?
It's different every time, sometimes it could start with some chords or a riff on the guitar or piano, or it could be a hook line that I start singing in the shower or something. My latest release 'Just Getting Older' started with that main chord sequence and then the song basically wrote itself after that, I love it when that happens! Other times I've left somewhere really pissed off and I've picked up my guitar  and its all come out within half an hour and theres been nothing in the pipeline beforehand. It's a process that works in strange and wonderful ways but I'm happy for it to come out which ever way it wants because I don't even want it to go away! It's a bit scary at times.

Finally- you seem to have spent a lot of time in the studio with your band... what's next for you and how soon can we expect to hear some more new music?
I'm playing a lot of festivals over the Summer, NE Volume magazine festival, Cornshed Festival, Northumberland Live Festival, Great Northern Festival, Bedale Fringe Festival. Me and The Insiders are doing a very special gig at The Empire in Middlesborough on July 16th. It's like THE venue to play in Boro and I'm excited to be returning. It's nice to play on a big stage and just have it! I do plan to release more music over the year, I'll just do it when I feel the time is right and when I get time haha. I would like to bang out material all the time and leave a good catalogue of work behind.


Alistairs latest release, Just Getting Older
Posted by Fiction Is Not Imagination at 08:06 No comments: 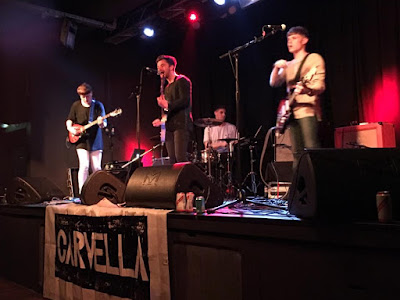 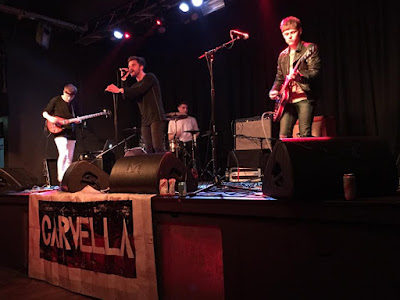 All in all, the band pull off a dynamic, watertight performance. Already having played at Live At Leeds, their next festival venture will be to play at the Isle of Wight this week alongside acts such as Little Comets and Yak on the Jack Rocks/This Feeling stage. This is a band with obvious drive and determination, and I get the feeling that they'll find themselves at the top of the bill in years to come.
Posted by Fiction Is Not Imagination at 11:03 1 comment: